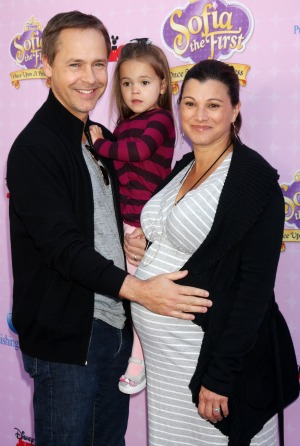 There is another celebrity baby in Hollywood as Chad Lowe and his wife, Kim, welcome their second daughter into the world. Radar is exclusively reporting the news that the baby girl was born in Los Angeles on Thursday night.

As of press time, her name and weight were not announced, but this is the second bundle of joy for the Pretty Little Liars star. His first child, Mabel, was born in May 2009, a little over a year before he walked down the aisle in August 2010. Lowe was previously married to two-time Oscar winner Hilary Swank for ten years before they divorced in 2007.

Lowe and his family were seen on Saturday at the premiere of Disney’s Sofia the First. He told People that his wife was due any day now and the nesting phase was in full gear.

He said, “I have been out buying a lot of stuff to organize [everything] we have. It is amazing how much stuff babies need. It is incredible.”

It seems that Lowe was quite prepared otherwise when it came to taking care of his growing family.

He explained, “The most important thing is being present when you are with your family and not being distracted by work or outside influences.”

The parents were also busy preparing big sister Mabel for the new addition and trying to tell her how important her new role was going to be.

Rob Lowe’s little brother revealed, “We’ve been introducing her to the concept and she seems to be very excited. She knows she’s got a big job and a lot of things to teach her sibling.”