An early review for Liz & Dick, the TV movie Lindsay Lohan’s people are hoping will restore the star’s luster, calls the Lifetime feature “half train wreck, half SNL skit.” 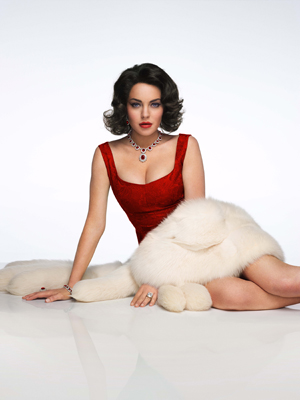 Early reviews for Liz & Dick, the Lifetime movie some are hoping will be a comeback vehicle for troubled star Lindsay Lohan, suggest that she’s in for a critical drubbing instead.

Tim Goodman, TV critic for The Hollywood Reporter, is positively scathing. The movie is “spectacularly bad,” and “like a high school play” because it “truly drags.”

Lohan herself is “woeful as Taylor from start to finish,” no surprise to Goodman, because she is “more memorable in the tabloids than she ever was as an actress.”

Though “there is not one minute in this film where she’s believable,” Goodman writes, Lohan as the older version of Taylor is particularly awkward.

“The moment Lohan appears in this get-up, it’s impossible not to laugh,” Goodman snarks. “It really does look like SNL. She can’t really pull off the young, sexy Liz with much believability, so the mid-’80s look is awkward squared.”

Despite his painfully dismissive review, Goodman recommends viewers watch this “instant classic of unintentional hilarity” for the laffs.

Variety reviewer Brian Lowry was a little less harsh, writing that Lohan herself is “adequate, barring a few awkward moments,” and co-star Grant Bowler “the movie’s secret weapon” for his performance as Richard Burton.

The film itself, writes Lowry, is “actually pretty good, all things considered.”

Nonetheless, both Lowry and Goodman advise that Liz & Dick would make a swell drinking game. Take a swig, Lowry writes, “every time a doctor or associate delivers bad news.” Goodman says that “in the right company with the right beverages, Liz & Dick could be unbearably hilarious toward the tail end of the 90-minute running time.”

In fact, by the time Lohan is stretching herself to play the older, ’80s Taylor, “your body may be cramped by convulsions.”

So start with beer, end with tequila? Got it.