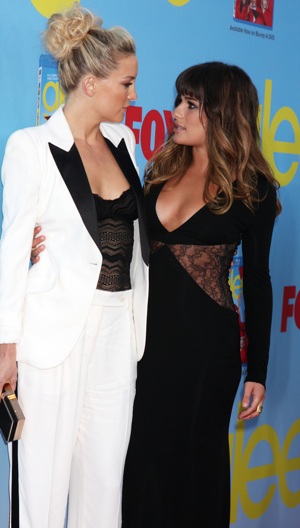 My head hurts. Does yours?

I just couldn’t keep up with all the storylines while watching this episode. As crazy as that sounds, it was nice to see some dimension in the plotlines, because I hate to say it — I was starting to missing the old Glee class.

We did get to see alumni when Santana (Naya Rivera) made an appearance. Also making an appearance: Kate Hudson’s unbelievably chiseled abs.

I hope you caught the anticipated McKinley High School rendition of Grease before you clamored to watch the finale of The Twilight Saga, Breaking Dawn Part 2. I know I did (hey skeptics, don’t judge me).

Let’s dive right in to this Degrassi-esque episode of Glee.

Lesson No. 1: If it seems too good to be true, it probably is.

Rachel (Lea Michele), what am I going to do with you? We learned that she got an audition for an off-Broadway play (quite an improvement from Lima school musicals). She has refocused her romantic feelings for her ex, Finn, (Cory Monteith) toward Brody (Dean Geyer). Her arch-nemesis Cassandra (the awe-inducing Kate Hudson) seems to be tolerant of her. Life seemed good. She had discussed the audition with Brody, and when Cassandra overheard, she discouraged the opportunity as she didn’t feel Rachel was ready. Rather than contemplate the advice, Rachel retorts with “I am ready,” and even suggests that Cassandra should try out for another part to “get back in the game.” Ouch. So, to us all, maybe it didn’t seem like such a bad suggestion — but to a dance maven with an ego such as hers? Cassandra’s revenge must be exacted for the appalling mention… but how?

Kurt (Chris Colfer) had stopped by later to begin a discussion over trying to go back to McKinley to watch the Grease musical.

Sidebar: I’m sorry, in this situation, Kurt, why are you trying to hinder Rachel’s progress? You were the one who was all about the “new” her, and here we are, asking her to backtrack and fall into the unrelenting grasp of high school memories. Not only are you asking her to see her ex, you are asking her to be tempted by unresolved feelings provoked by high school familiarities. Because… you want to see Blaine (Darren Criss), who has been dying to hear from you (doesn’t sound so daunting).

Well, Rachel does decide to go after Cassandra not only supports the venture, but offers up air miles to send Rachel back to Lima for the weekend (from hating your existence to bankrolling your excursions = red flag). Rachel, meanwhile, is oblivious to the grave she has dug for herself. After Rachel and Kurt leave, Cassandra, in her lionness prowl, snatches up Brody in her jaws — just kidding — asks if he will be her TA and that it involves “lots of late nights.” I was expecting minimal hesitation for some reason, but this boy lapped up the offer like water in a desert (red flag No. 2). (Keep reading…this segment to be continued in Lesson No. 3…).

The other dramatic storyline was with our princess, Marley (Melissa Benoist). She’s the girl-next-door, the girl we cheer for. Her honest character is a little awkward, and her lack of confidence this episode was relatable. The cheerleader we love to hate, Kitty (Becca Tobin) — yes, I found out her name — decided to sabotage Marley’s Grease outfits by shrinking them so she thinks she’s becoming fat (like her mother). She had a scene with her mother, who told her that she is in charge of her body, and that they would go on a diet — together. Such a touching and real scene. I personally hate the way Kitty references Marley’s mother (I would have hit Kitty myself), and when Kitty was able to persuade Marley to resort to throwing up to shed a few pounds? I almost cried. I hope you end up alone Kitty.

Ah, but our hero, Ryder (Blake Jenner) walks in and saves the day by telling her she doesn’t need it, and eventually (through a series of events) kisses her!

Oh, brother. Let’s get the most boring storyline out of the way. Jake (Jacob Artist) and Marley (Melissa Benoist), you had so much potential. I am not sure why Jake is so “scared” because he’s acting like a tortured vampire (here I go again with the mention of Twilight). Ultimately, not only did he lose the lead role in the musical to Ryder — he loses Marley to him, too.

Brittany (Heather Morris) is temporarily reunited with Santana when Finn (who did amazing at producing the musical, might I add) recruited her to take Unique’s (Alex Newell) spot as Rizzo. Poor Unique, even though she had been best suited to play Rizzo, I somewhat understood her parent’s concern for her safety (I wasn’t aware she was getting physically harassed for dressing as a female — heartbreaking!). I digress, this was the first time I saw Brittany and Santana’s chemistry because in earlier episodes this season it seemed as though Santana had mentally “checked out.”

Before Santana goes on stage (and is later joined in harmony with Unique), Brittany reminds her to use powerful emotions to help her performance. She then suggests using feelings of missing someone and throws it back in her face delicately that they are over because of her (Santana’s) own will. She was almost graceful as she walked away, leaving Santana with a seemingly gaping hole in her heart. Wonder what will come of that.

Lesson No. 3: If everyone’s getting back with their exes, it doesn’t mean you need to.

The finale song was the showstopper obviously, and as Marley took the stage as “Sandy” (as opposed to Sandra Dee) in her all black spandex outfit accompanied by the *hot* Ryder, their magical chemistry made the entire audience nostalgic. With the romance swarming around, each couple, new or old could see themselves on the stage.

Tina (Jenna Ushkowitz) and Mike (Harry Shum, Jr.) decide to rethink their relationship in the episode, so they saw themselves on stage.

Kurt and Blaine — although unspoken — seemed happy to be around each other, and as such, also saw themselves on stage.

The stage is also taken over by Finn and Rachel (that was surprising to me) and as the lead couple, Sandy and Danny, and for a moment I was confused if Rachel wanted to get back together. Most of these couples were focusing on present feelings, so I didn’t think that this was them reliving “memories.”

After the musical finished, Rachel runs out to cry and call Brody. But after making out with Cassandra, Cassandra picks up his phone and lets Rachel know that “he’s in the shower” and that Rachel left him all alone. Not only blaming her, she sticks the knife in deeper by saying that one thing already had “led to another” (do you think they really actually had sex?!). Rachel runs out and clearly emotional, Cory asks her what was wrong. When he realized it was about Brody and not about him, he leaves her yet again, telling her she should not ever contact him. What a blow Rachel, what a blow.

Rachel, you need to pick a side — and I am hoping, now more than ever you realize it! But your storyline is the most interesting.

Memorable picks of songs featured on this episode:

I hope I keeps up this kind of intense momentum because they are finally bringing the drama!

For more Glee recaps, check out: