The director is good about not sharing anything when he doesn’t want to. But he finally opened up about the biopic, and it gives a lot away. 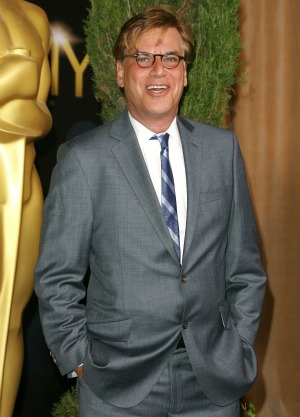 Aaron Sorkin has been pretty hush-hush about his Steve Jobs biopic, but he finally gave something away. And that something is pretty important for the movie.

“I hope I don’t get killed by the studio for giving too much away,” Sorkin told Newsweek and The Daily Beast. “This entire movie is going to be three scenes, and three scenes only.”

The three scenes will be re-enacting three of Jobs’ “most important product launches,” said the Los Angeles Times. The scenes will each be 30 minutes and will take place backstage at the events. According to the newspaper, the three product launches are: “The original Macintosh; NeXT, which was the start-up Jobs created after leaving Apple; and the iPod.”

The scenes will also take place in real time, so the audience will see 30 minutes of each event as they are happening. To prepare for the film, Sorkin said he spoke with those who were closest to Jobs.

Sorkin said he began a friendship with Jobs before his death, albeit over the phone. The second-to-last time Jobs called him, he had asked for advice on a commencement speech he was giving. The next time he called, he asked Sorkin to write a Pixar movie.

“Sorkin said he intended to end the movie with text or voiceover of the line, ‘Here’s to the crazy ones,’ from Apple’s famous Think Different ad campaign that ran after Jobs’ return to the Cupertino, California, company,” said the L.A. Times.

Sorkin ended by saying, “If I can earn that ending, then I’ll have written the movie that I want to write.”

The Steve Jobs biopic sounds like it will end up personal or emotional because of Sorkin’s close relationship with Jobs. But either way, it’s guaranteed to give everyone insight into what the Apple chief was really like.