The former general is in the middle of a sex scandal, but appears in a very different form this week in the new Call of Duty game. Did he agree to that appearance? 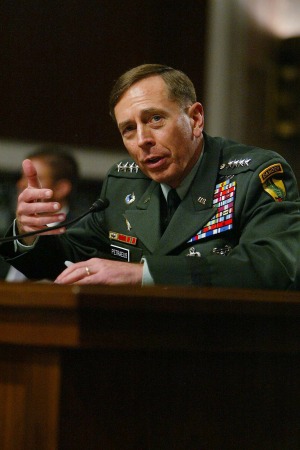 It may be bad timing, or a brilliant PR stunt, but on Tuesday David Petraeus showed up in a medium other than news channels (something he’s not used to these days). It looks like the former general has a cameo in the new Call of Duty game, Black Ops II.

It’s not clear whether Petraeus was a part of the cameo, or even knew about it. The character has the same name as the former Army general and his “likeness,” but is voiced by Jim Meskimen. According to the Associated Press, the character is also the Secretary of Defense, but in the year 2025.

“A scene introduces ‘Secretary of Defense Petraeus,’ a gimmick the game’s developers probably thought was clever when it was originally pitched,” said the Daily Beast, “but now appears egregiously poorly timed since Petraeus resigned from the government amid a scandal with so many tawdry twists and turns that the programming director at Lifetime is probably sitting at her desk giggling, ‘Tee hee, girl, this is too crazy even for us.’”

The aspects of the scandal keep widening, and as long as Petraeus keeps appearing in different forms, people will keep talking about it. The likeness in the video game is nothing new, though; likenesses of political figures are often used in games.

The game, Call of Duty: Black Ops II can be found in stores now.