The famous tree was promised before the storm, but because it was right in the middle of one of the worst-hit areas, it almost didn’t make it to New York. 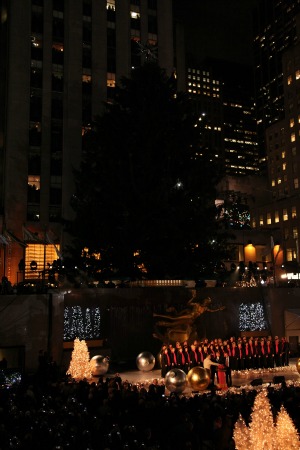 New York City may soon be known as the city that man (re)built, and they are showing that symbolically with the famous Rockefeller Center tree this holiday season. After Hurricane Sandy, many areas of the East Coast, but especially New York and New Jersey, had a lot of recovering to do (and they’re still in the process).

This year’s tree was donated by a New Jersey man whose house was in the path of the storm, and there were moments when he wasn’t sure if the tree would make it. He watched during the storm, hoping the tree would still become one of the most famous Christmas trees in the country.

“The New Jersey man who is donating the Christmas tree to New York’s Rockefeller Center spent a nervous night during Superstorm Sandy,” said the Associated Press. “Joe Balku says he learned four weeks ago that the 80-foot Norway spruce had been chosen for the honor. Then Sandy hit two weeks later.”

Balku said when the storm was overhead his Mount Olive home, he watched the tree sway all night even though it had been bundled. The soon-to-be-famous tree weighs 10 tons, and according to the AP, is 50 feet in diameter.

The tree was promised to the people of New York before the storm, and it must have been fated, because two of Balku’s other trees didn’t survive — only the chosen tree did. Being in the middle of the hurricane disaster area, Balku only got his electricity back over the weekend.

The tree is set up at Rockefeller Center annually and strung with 45,000 lights. According to NBC News, for non-New Yorkers, the tree marks the beginning of the holiday season in the city.

The Christmas tree lighting celebrates its 80th year in 2012 and will take place on Nov. 28. Mariah Carey and Cee-Lo Green have signed up as performers, along with many others.