The 40th Anniversary American Music Awards premiere this Sunday, Nov. 18, and fans will be voting for their favorite artists to win big. With Justin Bieber going toe-to-toe with Usher, will he nab the most noms and surpass his musical mentor? 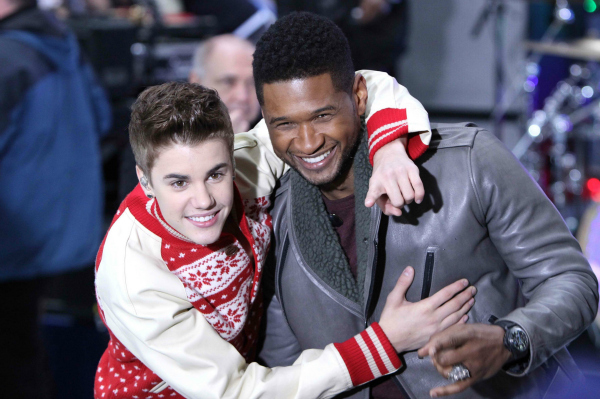 Before Justin Bieber’s swoopy hair and charming smile were giving young girls everywhere heart palpitations, he was just a young Canadian up-and-coming internet sensation. That, of course, was before Usher got involved.

After talent manager Scott Braun discovered the Biebs in 2008, Braun introduced the new kid on the block to the R&B powerhouse. Feeling a kinship — after all, he also struggled through the awkward pubescent years in the spotlight — Usher took the Biebs under his wing.

In the years since, Justin has blossomed under Usher’s tutelage — in more ways than one. Not only has he racked up an impressive array of awards, but he’s also developed a reputation as a bit of a charmer with the ladies… much like his mentor.

So, with both boys boasting three noms at the upcoming American Music Awards, will the student surpass his teacher? The two even face off against each other directly in the Favorite Male Artist — Pop/Rock category.

One thing is for sure, it’s been a rocky year for both the Biebs and Usher. Justin is currently nursing a broken heart from his breakup with Disney sweetheart Selena Gomez, but that seems like a small blip compared to some of the other headlines he’s faced this year: sex tape rumors, getting sick onstage, being sued by a concertgoer, cursing up a storm in first class, a paparazzo battery case and even a love child scandal.

Usher hasn’t fared so well himself. Although he did win custody of his kids with Tameka Foster in August, he had to lay stepson Kile Glover to rest after a Jet Ski accident in July. He also faced a death hoax and, most recently, created controversy when he cut in line at the voting polls.

It’s clear that the Biebs is following in his mentor’s footsteps in more ways than one. But how do they stack up in their main arena of music? Well, it depends on how you look at it. Over the course of his career, Usher has racked up 77 awards, with the Biebs reportedly edging him out at the moment with 78. That being said, some of JB’s awards are kind of obscure — J-14 Teen Icon Awards, anyone? — while his Yoda has an impressive seven Grammys in his collection.

To see if the Biebs trumps Usher at the AMAs, tune in Sunday, Nov. 18 at 8/7c on ABC. And don’t forget that SheKnows Goes to the Shows will be live on the red carpet at the same time!

Usher talks about his Grammy collaboration with Justin Bieber >>