It may not be the traditional post-turkey football game or Christmas movie, but an all-day marathon involving The Kennedy Family on ReelzChannel is an excellent choice! 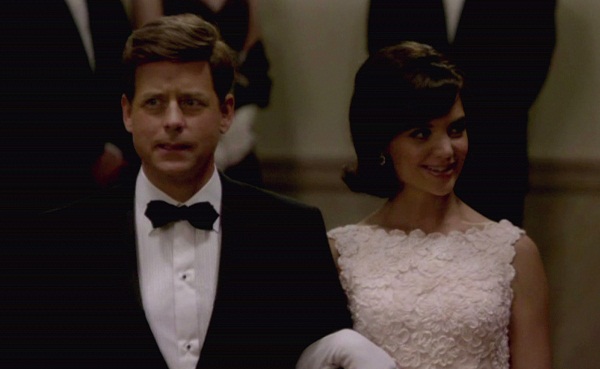 The Kennedys are a well-known and well-loved family in America. Very few people could readily admit to disliking JFK. He stood up for the rights of African Americans, believed in a more perfect society and, also, he was one of our most handsome presidents (along with President Obama, Ronald Reagan and, possibly, Franklin Pierce). Even red-faced Ted had his moments of greatness. And the Kennedy boys sure knew how to pick their women too! We’ve long been fascinated with the entire clan.

ReelzChannel capitalized on that last year with their Emmy-nominated The Kennedys. The miniseries followed the family until just past the assassination of Bobby Kennedy and focused on both Ethel and Jackie as they mourned the loss of their husbands. The Kennedys earned 1.9 million viewers, a record for Reelz. That number is especially important when you consider that the History Channel originally had The Kennedys but then decided to forgo doing it.

In hopes of recreating those numbers, as well as to promote their upcoming “sequel” After Camelot, Reelz will run the miniseries in its entirety on Thanksgiving Day. That’s eight hours of well-done, dramatic and moving American history.

The forthcoming After Camelot is based on a book of the same name by J. Randy Taraborrelli and follows the lives of the Kennedys from 1968 to the present. It would make an excellent present for the history buff in your family or would help you gear up for Reelz next Kennedy-related miniseries.

Forget the football game or your 8,000th viewing of White Christmas, and trade Bing, Rosemary and Danny for Jack, Jackie and Bobby. The special The Kennedys marathon starts at 8 a.m. EST. Oliver Stone’s JFK follows immediately afterward at 4 p.m. EST.

More on The Kennedys and the Kennedy family