The couple is a prime target for baby gossip. But this time, they have taken to Twitter to make a joke of any rumors out there. 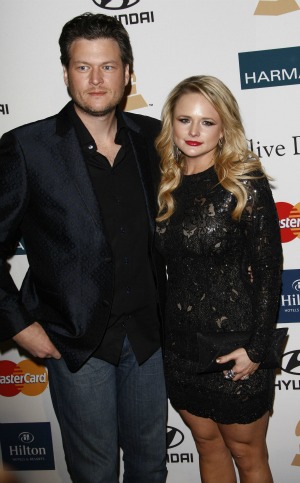 Rumors of a Miranda Lambert–Blake Shelton baby are making their way across the internet, but it looks like the news is as much of a shock to the couple as everyone else. Life&Style published a story that was slightly misleading, to say the least.

The headline on the cover said “Exclusive Baby News!” and included a photo of Reese Witherspoon and her baby and a photo of Lambert and Shelton. Next to their photo, it said “Blake & Miranda: We’re having a baby.”

“They definitely want children,” a so-called “insider” tells the tabloid, according to gossipcop.com, adding, “They’ll have a big family for sure.”

Tuesday, Lambert took to Twitter to talk about the magazine cover. She tweeted, “Wow! I just read the headline! ‘we are having a baby’ yay!@blakeshelton we’re getting a new puppy?:)”

A few minutes later, she decided to further dispel the rumors, by tweeting: “Don’t believe everything you read! I’m having a big ‘randarita’ right now In honor of the baby we are not yet having! #Sorryfolksparksclosed”

Shelton took to Twitter also, but instead of posting a comment, he decided to just respond to other people’s comments about the topic.

@taylor96_ tweeted to Shelton: “Wait is @Miranda_Lambert pregnant?” to which Shelton replied, “Either that or Reese had my baby… I’m confused too!!”

Fan @thesheltonss tweeted to him: “BLAKE YOU CAN’T DO THIS TO US IS SHE PREGNANT?!?!?”

Shelton responded with: “I hope not.. She’s passed out with a bottle of Bacardi in her hands!!!”

The couple seemed to poke fun at the cover while at the same time working to dispel the rumors. But in the meantime, they managed to show everyone what a cute (and country) couple they really are.