After the scathing Times review of his NYC eatery went viral this week, Fieri responds to the criticism on Today. 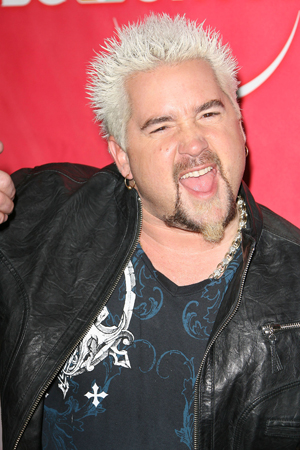 “I just thought it was ridiculous. I’ve read reviews, there’s good and bad in the restaurant business,” Fieri told host Savannah Guthrie. “But that to me went so overboard, it really seemed like there was another agenda.”

What agenda would that be? Fieri suggested that the writer was seeking notoriety. Whether or not NY Times food critic Pete Wells intended the review, “As Not Seen On TV,” to catapult him to fame, it certainly made waves Tuesday and Wednesday: The review went viral, swiftly hopping to the Times‘ “most viewed” and “most e-mailed” lists, with readers offering comments like “Best worst review ever!” about the zero-star, instantly quotable take.

Fieri, though? Not so much a fan.

Um, what? Two months to work the kinks out of a menu? That seems excessive. Did you charge diners any less for their meals?

“At this point, two and a half months, we’re not expecting to,” responded Fieri. “We’re trying to! We have a pretty big menu. Is it perfect right now? No. Are we striving for it? Yeah. Do I think I’m falling short? No. We’re doing the type of food America loves and we’re doing it the right way.”

So Wells was just off base? Nope, says Fieri. He came in with a plan to take down a famous guy.

“To me it’s impossible to have a dining experience where you come in and have every single thing wrong,” said Fieri. “Unless you come in with a different agenda and you want to sensationalize something and you want to blow it out of the water. It’s a great way to make a name for yourself: Go after a celebrity chef that’s not a New Yorker, doing a big concept in his second month, great way to hit it,” he said, pounding one fist into the other and smiling tightly.

Got it. Your food’s great, Wells is just jealous. Donkey sauce is delicious. Got it.