Dig and Oliver join forces to take down a family of bank robbers who just have to complete one last heist. What could go wrong? 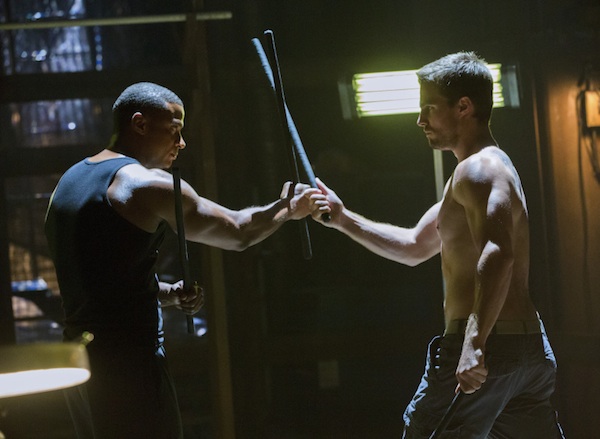 If I am ever a bank robber and I say, “Just one more heist and we’ll be set for life,” I want someone to kidnap me and force me into an early retirement because that line always indicates trouble. But, apparently the bank robbing family in Arrow hasn’t seen Heat, Butch Cassidy and the Sundance Kid or any other heist movie.

After low-rate criminals pull off a robbery (that’s right, rich people aren’t the only villains) and a cop gets shot, Dig (David Ramsey) tries to persuade Oliver (Stephen Amell) to go after the thieves. Oliver takes some convincing because he’s really focused on sticking to his dad’s list. But, Dig really is more than a sidekick and kind of manipulates Oliver to hunt down the robbers by introducing him to the cop’s wife.

Once Oli is convinced that Arrow should seek justice for everyone, he and Dig track down the robbers, who happen to be a family; even the mother is involved. No one ever expects the mother. In the middle of another bank robbery, Arrow actually traps the cash from the thieves and they leave empty-handed, which leads to a family discussion about whether they should give up on their career choice or not. But, the cop-shooting son Kyle manages to convince the family that just one more big heist and they’ll “be set for life.” That’s never a good sign.

He recruits the pretty and nerdy IT girl from Queen Corp to research the dad, Derrick (because Oliver suddenly forgot his hacking skills?). Together they discover Derrick used to work for Queen Industrial’s steel factory and was let go without a severance package when the factory shutdown and it ruined his life. And who shut it down? Oli’s father. So, now, he’s feeling a little guilty and responsible. He tries to give Derrick a way out, but instead the whole family supports Kyle’s “one last heist” idea.

Before their last hurrah, Oliver has to attend Laurel’s (Katie Cassidy) benefit. Laurel and Tommy (Colin Donnell) are on weird terms. She’s really cold to him for no reason and he’s trying to do anything to make her happy, even asking Oli’s messed-up little sis for girl advice. At the benefit, Thea realizes Tommy was actually asking advice about another girl and not her (she’s barely 16!) and starts getting smashed at the party (Again, she’s barely 16! Where is her mother?).

Thea gets into it with Tommy and then vomits and Laurel, yet again, pushes Tommy away, but leaves him with a kiss on the cheek because he’s “earned it.” It’s no surprise when Oliver quickly jets out of the party to catch the robbers. I would have wanted to as well with all that drama. 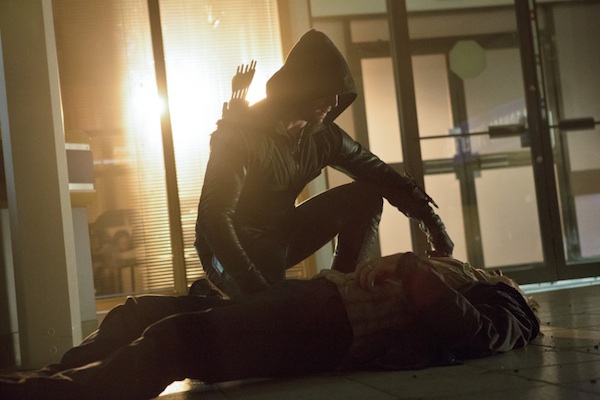 In the middle of the heist gone wrong, a security guard attempts to shoot Kyle, but Derrick winds up taking the bullet. Very reminiscent to Oliver’s story.

Later, Dig tries to explain to Oli that he’s not responsible for what happened to Derrick and that his dad would even be proud. He’s a good guy and exactly what Oliver needs to stay focused, but still be a human being instead of just a green hood wearing-gangster.