While we’re stoked about Breaking Dawn — Part 2 hitting theaters this Friday, we’re bummed that the final film also brings the end of the series in cinemas. Help give The Twilight Saga the immortality it so deserves with these ideas for paying homage. 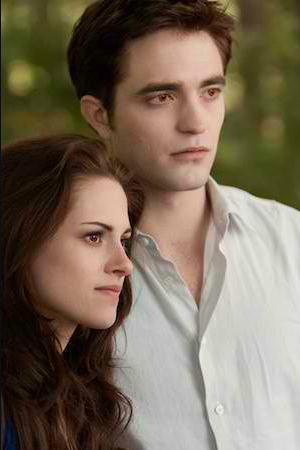 If you hate saying goodbye to Bella and the gang as much as we do, channel your inner crazy ex-girlfriend and pretend like goodbye is simply code for see you later. Once a year (or more, depending on how bad your withdrawal symptoms are), throw a Twilight–themed bash for you and all your Twi-hard friends. You can dress up like the gang, sample Twilight-inspired fare, and of course, hunker down for a Twilight movie marathon. Bonus? It will be the one night of the year you can show up in public with a hicky and people will actually think it’s cool — OK, maybe not cool, but at least they’ll figure it’s part of your party apparel.

Thanks to a shiny, new theme park, fans of J.K. Rowling’s Harry Potter series flock to Florida every day to wander the halls of Hogwarts at The Wizarding World of Harry Potter. But until someone figures out how to pull off a Twilight-styled theme park, Twi-hards can pay homage to their favorite franchise by planning an annual pilgrimage to the tiny town in which the series is set: Forks, Washington. Prior to becoming the setting for Stephenie Meyer’s books, Forks was most famous for sport fishing and abundant precipitation (212 days per year!). So, when you’re feeling Twi-stalgic, pack up your fishing lures, galoshes and The Twilight Saga book set and hit the highway.

Getting hitched? Throw a wedding worthy of Edward & Bella >>

If annual odes are too few and far between for you, consider paying homage to Twilight with a daily reminder. Our suggestion? Saddle your furry friend(s) with names from the series. Obviously, you could go simple and straightforward with this by naming them after the characters. You could also get a little creative with it, depending on what type of pet you have. Got lovebirds? Name them after Twilight‘s most lovey-dovey couple — Edward and Bella, of course. Proud parent of an ebony pooch? Call him Jacob Black Lab. Have a Yorkshire terrier as opposed to a Labrador? Then Eric Yorkie is the obvious moniker for your doggy dearest.

Team Edward or Team Jacob? What your Twi-crush reveals >>

Put a bow on it

Obsessions are kind of like big secrets — it’s almost impossible to keep them to yourself. As soon as you have one of either, you feel the overwhelming urge to share it with a friend, family member, colleague or even some random dude on the subway, if it means you don’t have to bear the burden of carrying it solo. A fun solution for passing on your own single-minded Twilight focus is to wrap it up. You can gift the books, the movies or even both for the friends you’d totally turn into vampires if it meant saving them from the Spanish influenza. (Yep, you love them that much!)