Taylor Swift says all she really wants to be is a 1950’s housewife. 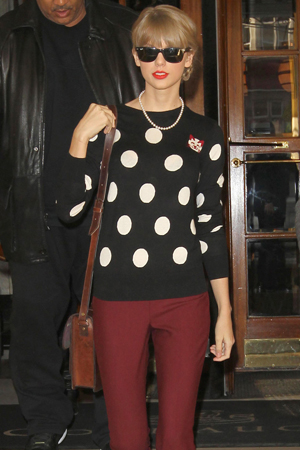 We can’t be the only people who have noticed that Taylor Swift’s style has shifted dramatically in recent months. The look can definitely be compared to the Cape Cod chic of Jackie Kennedy back in the ’60s, though now ex-boyfriend Conor Kennedy isn’t necessarily the reason why.

The problem with being famous and liking dresses? She has to buy them, like, all the time.

“I’m in a predicament where I can’t wear a dress twice or else it’s pointed out in magazines,” she lamented. “So unfortunately I have to shop for dresses all the time.”

Teasing Taylor Swift was too easy at the CMAs >>

Despite her success — and her millions of dollars — there’s still one dress she can’t get her hands on — the pink Ralph Lauren gown Gwyneth Paltrow wore when she won her Best Actress Oscar for Shakespeare in Love.

“I was 15 and going to prom for the first time, and I saw that picture of Gwyneth in the pink gown,” she said. “I went all over the mall and showed it to all the store owners and said, ‘Do you have anything that looks like this?’ And no one did.”