Courtney Stodden wants to be a serious singer, but her big coming out party at a West Hollywood gay bar has been canceled. 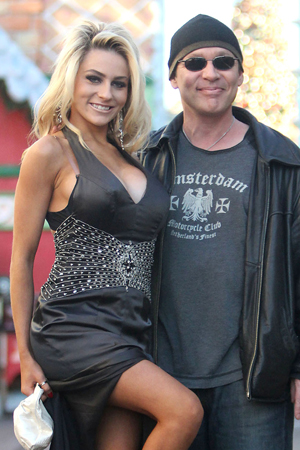 Courtney Stodden — the wife/daughter of creepy Lost actor Doug Hutchison — is a lot of things, but she only wants to be called one thing: A singer. The 18-year-old blonde was set to perform her song “Reality” and do a pole dance at a West Hollywood gay bar on Nov. 21.

“I’m super excited, it’s going to be such a fun night,” Stodden told E! News on Wednesday. “You can expect to see a whole lot of sexy — me singing live and super-hot backup dancers!”

Don’t buy your tickets just yet: The bar has abruptly canceled her performance without comment, according to TMZ. The bar was apparently “fearful” of what the singer would bring into the club.

Read: Sketchy guys who get off on young girls writhing around on stage. Not exactly the target market of a West Hollywood gay club.

Oh, great: Get ready for the Courtney Stodden and Doug Hutchison reality show >>

Don’t be too sad, though: You can still hear Stodden’s attempt to sing via her video for her 2010 song “Don’t Put It On Me.” The video for that ditty included a really sad pink poodle and lyrics like, “I’ve been shopping, I’ve been popping.”

Stodden wasn’t planning on showing her girls during the club appearance, either. The porn-star-in-the-making say she’s holding out for a Playboy cover to do that.

Courtney Stodden: All grown up and ready for divorce >>

“Playboy, we have a lot of respect for,” mom Krista said after her daughter turned 18. “There have been a lot of wonderful women who posed for Playboy that have gone on to do really great things. [Courtney’s] not ruling that one out at all.”

Playboy’s reaction? “LOL, no thanks.”