The two actors have a new movie coming out, but few people know their love story could have really happened in real life. 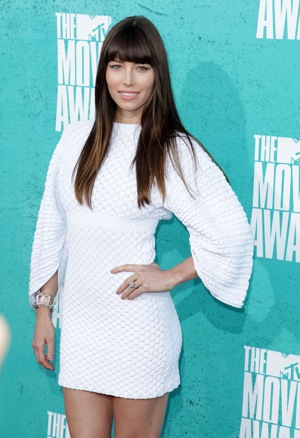 Jessica Biel and Gerard Butler have a new movie coming out. But allegedly, the two actors were more than just co-workers while shooting the film.

According to RadarOnline, the two reportedly had a relationship during filming of Playing for Keeps. Since Biel just married Justin Timberlake, the timeline doesn’t seem to work out at first glance, but filming happened while Biel and Timberlake were broken up in 2011.

It looks like the 42-year-old Butler may be having regrets about splitting with the actress.

“Gerard doesn’t have many regrets, but not treating Jessica with the respect she deserved while they dated is one of them,” a source told RadarOnline, according to The Huffington Post. “He genuinely believes she was the one that got away.”

The relationship apparently ended because Biel was ready to settle down and Butler wasn’t, but it looks like he won’t ever make that mistake again. Biel married Timberlake just a few weeks ago, after dating on-and-off for years, and their commitment came very soon after Butler and Biel ended their relationship.

“Jessica liked Gerard a lot — she was into his boyish nature, but she wanted something more serious. She was ready to settle down,” said the source. “That’s why, after getting close on the set of Playing for Keeps back in 2011, their relationship soon fizzled out.”

Playing for Keeps is about a woman who falls in love with her son’s soccer coach. It will be in theaters Dec. 7.

“The relationship wasn’t meant to be, and when things petered out in Oct. 2011, Biel patched things up with Timberlake — who wasn’t about to let Biel be the one who got away from him, either,” said The Huffington Post. “Timberlake proposed in January, and the two tied the knot in Italy in October.”

Timberlake and Biel are closer in age and seem (at least now that we know they are married) to be meant to be, and hopefully, Butler will soon meet a woman he won’t let get away.