Hope Solo has reportedly married fiance Jerramy Stevens, despite his having been arrested on suspicion of assaulting her just two days ago! In between court hearings, it is reported the pair snuck off and exchanged vows on their original wedding date. 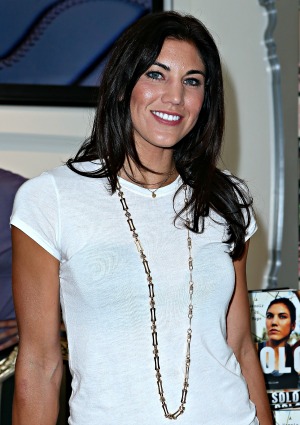 Has Hope Solo married Jerramy Stevens? After a bizarre series of events that kicked off in the early hours of Monday morning, congratulatory wishes may be in order for the couple.

Dave Mahler of Seattle radio station 950 KJR reported Stevens and Solo tied the knot on Tuesday evening, just one day after he was arrested for allegedly assaulting her.

Maybe sex should be an Olympic sport, too >>

The wedding comes as a shock to many for two reasons: First, it wasn’t widely known the couple of only two months was engaged, and second, there’s an open investigation looking into claims of fourth-degree domestic abuse that’s not even two full days old!

USA Today reports police responded to a disturbance call at 3:45 a.m. Monday involving a fight at a party. The police report reveals Hope Solo’s brother, Marcus Solo, said he used a stun gun on one of the unwanted guests at the party.

E! reports that based on information gathered at the party, police proceeded to arrest Stevens. While the cause of the fight has not been revealed, the reports state the 33-year-old athlete had dried blood on his shirt and cheek.

The former Seattle Seahawks player told police the blood on his face was from a kiss from his fiancee.

Care to leave a congratulatory wish or other words of advice for newlywed Hope Solo?