The six-kid brood jumps on tables, throws food while out to dinner at pizza place. 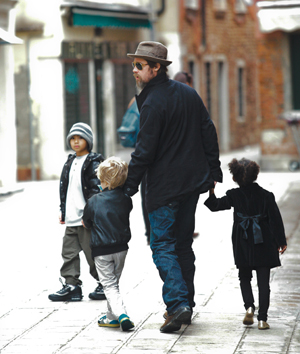 Brad Pitt and Angelina Jolie certainly have a relaxed attitude when it comes to taking their clan to restaurants: A source told Us Weekly that whenever the Jolie-Pitts visit Arris’ Pizza in Brad’s hometown of Springfield, Missouri, the brood goes wild, jumping on tables and throwing food at one another.

At least other patrons don’t have to put up with the chaos: The source says that the restaurant shuts down for the night when the family visits.

How much do Brad and Angelina pay their nannies? >>

“Brad and Angelina just sit there and talk to one another while the children run around in circles!” says the source, who also says that the couple leaves the nannies (all six of them) at home during visits.

The source didn’t say whether the Jolie/Pitts are good tippers. Or what Arris’ waiters think about trying to bring out hot trays of pizza without accidentally tripping over little children who’d probably prefer not to have pizza dumped on them.

However, the article puts a positive spin on the antics of Maddox (11), Pax (8), Zahara (7), Shiloh (6) and twins Vivienne and Knox, 4, stating that Angie and Brad are just letting the kids “enjoy themselves.”

Brad Pitt designs chairs only he and Angie can afford >>

Well, sure. Kids love running around in circles. Most parents would prefer the circle-running to take place in a park instead of in a restaurant with glassware and piping-hot food, but at least the Jolie/Pitts don’t force other patrons to deal with the din.

Read more on the Jolie/Pitt clan

Angelina Jolie shares the story of Malala with her kids
Brad Pitt has a sweet tooth for Candy Store?
Angela Jolie’s daughter to join Maleficent cast