Beverly Hills Cop: The Series is becoming a reality. It even has a new star. Find out what young actor in brave enough to follow in Eddie Murphy’s famous footsteps. 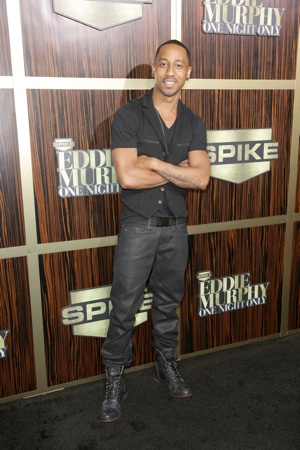 Beverly Hills Cop is heading to TV. CBS is developing a series based on the popular film trilogy that starred Eddie Murphy. The movies, along with 48 Hours, made the actor a household name. Perhaps the property will have the same effect on another actor?

According to TVLine, the network has found someone talented enough to fill Murphy’s shoes. Brandon T. Jackson has been cast as the lead in its Beverly Hills Cop pilot. Jackson won’t play the same role as Murphy (Axel Foley). Instead he’ll star as his son.

The character is Aaron Foley, “a transplanted Detroit police officer now fighting crime in Beverly Hills, all the while trying to escape the shadow of his infamous tailpipe-banana-ing dad.”

Oddly enough, Murphy suggested Jackson for the role. The actors have a lot in common. Like Murphy, Jackson also began his career as a stand-up comedian. Talk about a winning endorsement! For fans of the original, Murphy is expected to appear in the pilot episode. If the show is taken to series, he could sign on as a recurring star. Fingers crossed.

Jackson’s no stranger to playing the son of a comedy veteran. He played Martin Lawrence‘s son in Big Mommas: Like Father, Like Son. He also starred opposite Ben Stiller, Robert Downey, Jr., and Jack Black in 2008’s Tropic Thunder.

Interesting side note: Jackson actually grew up in Detroit. Therefore, this role is right up his alley.

What do you think of the new Foley?