Rivals Ralph Lamb and Vincent Savino join forces to catch a conman stealing from the Savoy. There’s no way this doesn’t end with Lamb’s rifle pointed at Savino’s head. 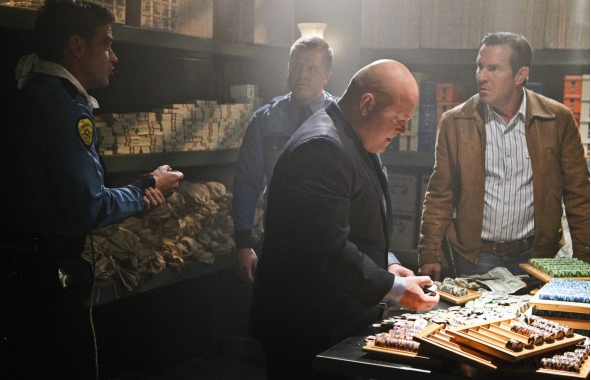 Vegas is a small town. It was only a matter of time before Sheriff Ralph Lamb (Dennis Quaid) ran into a crime scene that pointed back to gangster Vincent Savino (Michael Chiklis) and the Savoy. The unexpected part was this time Savino was one of the victims.

Sheriff Lamb is on the case of a slain dentist Dr. Saffron who also has a crippling gambling addiction. He lost his wife, his son’s college money, and wound up in debt to his intimidating bookie over it. After Ralph eliminates the wife as a suspect, he interrogates the bookie, whose explanation of innocence is quite logical. You don’t kill someone who owes you money. “It’s just bad business.” Besides, Saffron just paid off his $37,400 debt. Pretty impressive for a broke guy.

Just when it looks like he’s out of leads, Lamb discovers that the victim was making fake Savoy gambling chips. Lamb’s been waiting for an accuse to hassle Savino, so he can’t rush over to the Savoy fast enough. Of course, Savino is already aware there are fake chips floating around and currently has a guy’s head in the toilet trying to get answers.

Savino is able to convince Lamb that he doesn’t know anything about the dentist and that it’s in their best interest to work together to find the thief/killer. Knowing the cowboy that Lamb is, Savino invites him to meet his toilet bowl prisoner and together the two are able to get a few more leads. Just not fast enough. The thief breaks into the Savoy’s vault and steals Savino’s money.

The unlikely duo work together to discover a female cashier at the Savoy was in on the scam with the dentist, but it was her greedy boyfriend who took things to the extreme. He killed the dentist to tie up loose ends and pulled the Savoy heist on his own.

Lamb and Savino separately hunt down the thief, but Savino gets to him first. Lamb arrives just in time to see Vincent has a gun to the forger’s head, so Ralph pulls out his rifle and threatens to shoot Vincent. The two argue over whether Vincent should be allowed to kill the man himself and get his own justice.

Ralph tries to argue the side of the law, but Vincent cunningly points out that Lamb makes his own law. The first time he saw him, he was beating the crap out of three guys and now he is “hiding” behind his shiny sheriff’s badge. And it’s true. Lamb’s definition of justice isn’t always the same as the judicial system’s. Hard words to swallow coming from a man whose morally reprehensible.

At the end of the showdown, Savino surrenders his gun and allows Lamb to arrest the young man without any need for gunfire. He does, however, make sure to get in one solid blow to the thief’s face and get his money back first. And you’re kind of glad he wins. He may be a ruthless killer, but sometimes he’s just more likable than Lamb.