While ABC has yet to announce the new Bachelorette for the next season, someone is already throwing her hat into the ring. It’s Dancing with the Stars pro dancer Cheryl Burke. 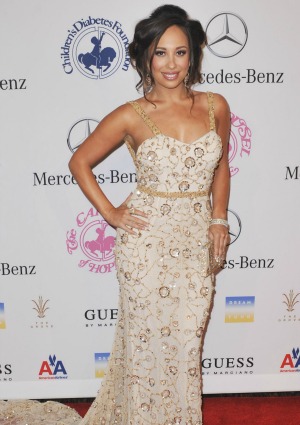 This isn’t the first time we’ve heard this news from Dancing With the Stars pro dancer Cheryl Burke. The star is again putting the stories out in the press that she met with the producers of the ABC show The Bachelorette.

This story first emerged back in June, when she told People, “My dating record hasn’t been great the past couple of years, so if I have a chance to go on (The Bachelorette), I will. I’m getting old, you know, so it’s something of interest to me.”

Burke quickly changed her stance about a month later, when she began dating Toronto Maple Leafs player Joffrey Lupul. Her romance with the professional hockey player was a brief summer fling. Now, the dancer is singing a different tune.

After Monday night’s taping of the ABC dance show, Access Hollywood caught up with the reality show star, who dished on the possibility. She said, “We (she and Bachelorette producers) met over the summer, and it’s something that I would possibly be interested in doing. We’ll see what happens in the future.”

The 28-year-old has made no secret of the fact that she would like to settle down and get married soon. However, her work life makes it difficult to find a man.

Burke tells the Hollywood entertainment show, “It’s been a few years of not even going on a date and just being really married to my work… We’re rehearsing like 23 hours a week,” she said. “We’re traveling back and forth. It’s been hard to really, actually focus on my personal life.”

She definitely sounds open to the possibility, and she has co-star and Bachelor-franchise alum Melissa Rycroft there to offer advice. Rycroft said to EW, “I would say to whoever goes into that role, I don’t think you can necessarily go in and go, ‘I’m going to find my mate, my spouse.’ Go in saying, ‘This is a new adventure. If it leads me that way, or if it at least gives me a great, new relationship, take that.'”

There’s no word yet on when the new Bachelorette star will be announced, but the ABC show returns to the airwaves in January 2013.