Former Larry Sanders Show star Janeane Garofalo just found out she was married for twenty years. She hadn’t realized it until now. 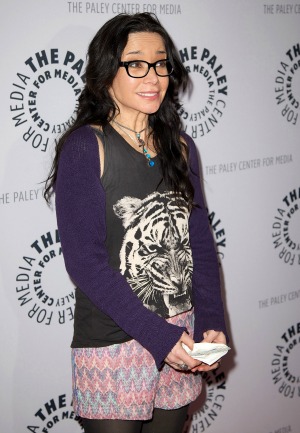 Janeane Garofalo is known for having been funny throughout her career, but who knew she was also funny when it came to marriage? The comedienne just found out she has been married for the last twenty years and never even knew about it.

Two decades ago, the former Larry Sanders Show star dated current The Big Bang Theory producer Rob Cohen. During that time, they enjoyed a drunken night in Vegas that included a trip in a taxi to a drive-through chapel.

Garofalo told the story at the New York Comedy Festival on Saturday, during The Ben Stiller Show reunion.

She said, “Rob and I got married, for real, which we had to have a notary dissolve not 30 minutes before we got here tonight. We were married for 20 years, until this evening.”

The snafu was discovered when Cohen got engaged to Jill Leiderman, a producer on Jimmy Kimmel Live! Cohen’s lawyer was the one who made the discovery about the Cohen-Garofalo marriage.

As Garofalo told the story, “‘We dated for a year, and we got married at a drive-through chapel in a cab.”

Explaining the 20-year oversight, Garofalo said, “[We thought] you have to go down to the courthouse and sign papers and stuff, so who knew?”

Well, Janeane, that’s what almost everyone who has ever gotten married thinks, and since your marriage was a success for twenty years, we won’t argue with your logic.

On Saturday, the duo did a quickie divorce in which they had the papers notarized at a midtown bank in New York.

Garofalo also told the audience she no longer drinks. That might be good news for any future husbands.