It’s a boy for Style Network star Tamera Mowry as her baby waits an additional two weeks to make his big debut. 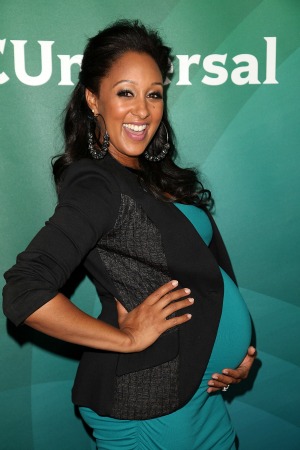 While this one took his time coming into the world, Tamera Mowry has finally given birth to her baby boy. The reality star’s little bundle of joy decided to wait two weeks past his due date before he joined his family, but everyone is happy and healthy

Aden John Tanner Housley was born on Monday, Nov. 12 to Mowry and her husband, Adam Housley, who is a reporter for FOX News. Little Aden came into the world weighing 9 lbs., 5 oz. This is their first child together after marrying in May 2011.

Housley told In Touch today, “He is healthy, happy, strong, beautiful and our families are so excited to have another grandchild, cousin and nephew.”

Mowry knows a thing or two about babies since her twin, Tia, gave birth in 2011 to son Cree Taylor. At the time, Mowry told Us Weekly, “When my sister was pregnant, she told me everything that I needed to know about pregnancy.”

The enthusiasm continued from all over the web as her former Sister, Sister co-star tweeted on Tuesday, “Yay!!! I can finally now say! I am an auntie!!!! Can we say chunk munk!!! So happy & blessed! Cree now has a play date!”

The two sisters currently star on the Style Network reality show Tia & Tamera. The network put out a statement today saying, “On behalf of the Style family, we congratulate Tamera and Adam on the arrival of Aden John Tanner Housley.”

It looks like the Style Network is happy they have another storyline for the current season.