Over half a million people have signed their name to a “Dump Trump” petition — at least one of whom is quite famous in her own right! This celebrity, along with many, many more, wants to see retail chain Macy’s part ways with Donald Trump for good. 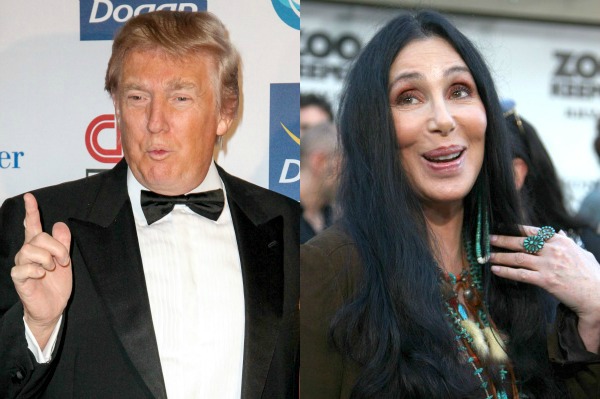 The petition known as “Dump Trump” is now being backed by the one and only Cher. The songstress was quick to swear off of shopping at Macy’s until they cut ties with Donald Trump — at least, that is, as soon as she caught wind his line of cuff links and ties has been there since 2007.

Cher, who apparently doesn’t make it to the mall very often these days, ranted on Twitter, “I’ll NEVER GO TO MACY’S AGAIN! I didnt know they sold Donald Trump’s Line!”

Donald Trump: No regrets, no fear of Dump Trump petition >>

In a series of tweets, the 66-year-old singer said of the 66-year-old business magnate, “If they don’t care that they sell products from a LOUDMOUTH RACIST CRETIN,WHO’D LIE LIKE “HIS RUG” TO GET SOME CHEAP PRESS ! I CAN’T BELIEVE MACY’S THINKS HE’S THE RIGHT “MAN” 2 REPRESENT THEIR NAME !”

Despite Cher’s Dump Trump support, not to mention over 500,000 signatures having been added to the petition as of Tuesday afternoon, the host of Celebrity Apprentice remains quite unfazed.

He shot back via Twitter Tuesday, clarifying, “@cher–I don’t wear a “rug” — it’s mine. And I promise not to talk about your massive plastic surgeries that didn’t work.”

Ouch. Donald Trump continued, a little less directly this time, “It’s amazing how people can talk about me but I’m not allowed to talk about them.”

Michael Cohen, spokesman for Donald Trump, told the New York Daily News, “Mr. Trump is important to Macy’s, both as a brand and as an endorser. His ties, shirts, cufflinks, fragrances and other merchandise are top-selling items across the country… The country has been founded on the principles of freedom of speech — something Mr. Trump is entitled to as well as the creator of this petition.”

So it seems everyone’s got the right to say what they’d like, but it’s Macy’s that is ultimately going to end up caught between their business deal and the public Dump Trump supporters.

What do you think Macy’s should do in response to the Dump Trump petition?