Having formally resigned from the charity he started, Armstrong ignites a Twitter firestorm with his cheeky photo. 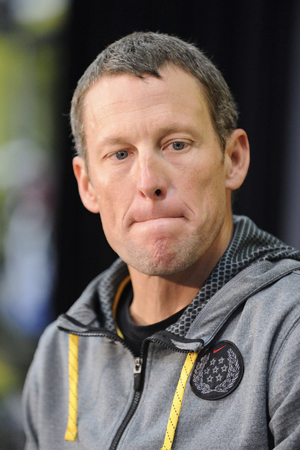 Lance Armstrong is having a bad autumn. Just weeks after he was dumped by all his sponsors, formally stripped of his Tour de France wins and banned from competitive cycling for life due to doping accusations, Armstrong has oficially cut all ties with his cancer-fighting foundation, Livestrong.

As ESPN reported, Armstrong resigned from Livestrong’s board of directors on Nov. 4. Armstrong had resigned as the chairman of the charity he founded on Oct. 17, but it wasn’t until Nov. 4 that he formally cut Livestrong ties.

Armstrong must be feeling the sting of all the accusations and criticism, because a few days later he ignited a Twitter war: Saturday, he tweeted a photo of himself to his almost 4 million followers, picturing himself lying on his couch underneath a prominent display of his Tour de France yellow jerseys.

“Back in Austin and just layin’ around,” he wrote.

The photo has been retweeted over 10,000 times, reported Examiner.com, and earned hundreds of comments that ranged from support (“never have left your side”) to fierce criticism (one respondent claimed Armstrong was “displaying the symptoms of someone sociopathic”).

One user, livethelifeyoulove, affirmed that “I think it is really pathetic how the media has blown this apart and I do not agree with your titles being stripped…even if you did cheat. You beat cancer and you did an amazing thing with Livestrong and awareness and support for so many.”

On the other hand, mattantonello wrote “An arrogant cheater. Classy.”

Livestrong spokeswoman Katherine McLane told Examiner.com on Monday that Armstrong “remains the inspiration” and is still its largest donor with nearly $7 million over the years.

Jeff Garvey, the foundation’s current chairman, told ESPN that “we are deeply grateful to Lance for creating a cause that has served millions of cancer survivors and their families. We are beholden to the Armstrong family for the nearly $7 million in contributions throughout the foundation’s history. Lance Armstrong was instrumental in changing the way the world views people affected by cancer.”

Well sure, that guy’s gonna be an Armstrong fan — his resignation gave Garvey a new job.

Say, does that mean all the people who wear those stupid rubber bracelets will stop doing that now?