Friends of the Modern Family star say her mother is lying about saving Ariel Winter from statutory rape.

It’s gonna be ugly at the Winter family Thanksgiving table this year: Friends of Modern Family star Ariel Winter accuse mother Chrystal Workman of lying about the 14-year-old’s relationship with an 18-year-old. 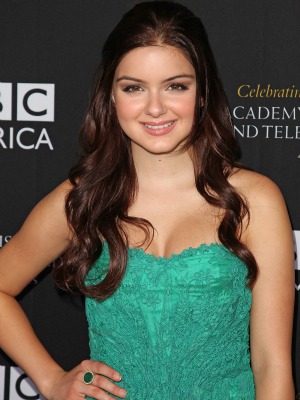 Public notice of the troubled Winter family began in October, when a judge determined that Ariel was being physically and emotionally abused by mother Chrystal. The judge placed Ariel in a temporary guardianship with her older sister, Shanelle.

Ariel Winter: Abused by her mom? >>

Chrystal and Ariel’s brother, Jimmy, denied the abuse on Entertainment Tonight. Jimmy said that in fact, the trouble is all due to Ariel’s older boyfriend, Disney star Cameron Palatas, who is over 18.

That would be, of course, the same boyfriend that Chrystal Workman reported last Thursday that she “caught” while “engaging in behavior” that she says Ariel is “too young mentally and physically to understand.”

Ariel Winter’s mother: I saved her from statutory rape! >>

Firing back, friends of Ariel’s told TMZ that Chrystal is “flat out lying.”

The timing of Workman’s accusations certainly does seem suspect: Though she claimed that Ariel’s relationship began in the summer, she didn’t mention catching them at anything until after Ariel asked to be released from her custody at the October hearing.

TMZ reported that at least one law enforcement source didn’t believe that the “catching” incident ever happened, or that Ariel and her boyfriend were sexually involved. That’s what Ariel’s friends also told TMZ. One friend said that “Ariel is so innocent, she never even kissed a boy until her first kiss in a Modern Family episode.”

Speaking of Modern Family, TMZ also reported that Chrystal was so annoying on the set of the hit show that crew members and actors “hated” her and considered sneaking Ariel food like grilled-cheese sandwiches when her mother ordered Ariel to eat only raw vegetables and egg whites.

Well, clearly, that last bit is abuse. You ever tasted an egg-white omelet? Tree bark is more toothsome.