Upon discovering Bella was going to have a baby, she and Edward decided to name the little girl… Renesmee?! Yeah, yeah, it’s a mix of your mothers’ names. We get it. But we can think of a few far better ideas to let Mama know you love her. 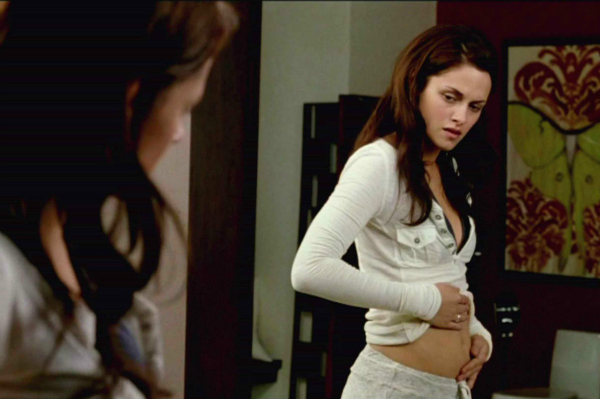 Repeat after me: Babies need middle names, too

So, Bella’s Mom is named Renee and Edward’s adopted Madre is Esme. In tribute to their beloved matriarchs — and likely in an attempt to avoid family politics — the newly minted Mr. and Mrs. Cullen smooshed the two names together to form Renesmee. Not only will most people not make the family name connection (which kind of defeats the whole purpose, right?), but they’ve also basically set their daughter up for a lifetime of mispronunciations and awkward nicknames. Uh, hello Nessie! The moral of this story? If you are stuck on the idea of saddling your kid with a strange hybrid name, do them a solid and stick it between their first and last.

Give Mom some parenting props

Between the weird noises, projectile vomiting and mood swings, your little bundle of joy will at times seem like something from The Exorcist. Instead of naming your sweet monster after your mother (or mothers, in Bella and Edward’s case), do something that will simultaneously shock and genuinely touch your mother: ssk for her advice. As much as you never thought you’d admit it during your wild teenage years, she was right about a lot. We’re sure she’d much rather hear you admit that than hear people constantly tripping all over her grandbaby’s name… and knowing she somehow played a part in that linguistic roadblock.

Think big… after all, the woman gave birth to you

They don’t call it labor for nothing. The process of childbirth isn’t easy, and raising that baby sure isn’t any easier. Mom deserves credit where credit is due — I mean, hey, look how well you turned out! It makes sense Bella and Edward wanted to make a grand gesture. But think outside the box! If you already have a name in mind, slap that sucker on a star. Thanks to sites like StarNamer.net, you can choose from thousands of stars in the universe to name after your loved one. The name you choose will be registered in a database designated by the Smithsonian Astrophysical Institute and will be copyrighted with coordinates so you and Mama can spot her star using a telescope. Hmm… Renesmee has a celestial ring to it, don’t you think?

More on The Twilight Saga

Team Edward or Team Jacob? What your Twi-crush reveals
Tinseltown Twi-hards: Celebs bitten by the Twilight craze
Getting hitched? Throw a wedding worthy of Edward & Bella