Fans of the Twilight Saga cite the romanticism in the series as one of its most defining factors. In honor of Breaking Dawn — Part 2’s Nov. 16 premiere, we bring you all the sweet deets on saying your own “I dos” in Edward-and-Bella style. 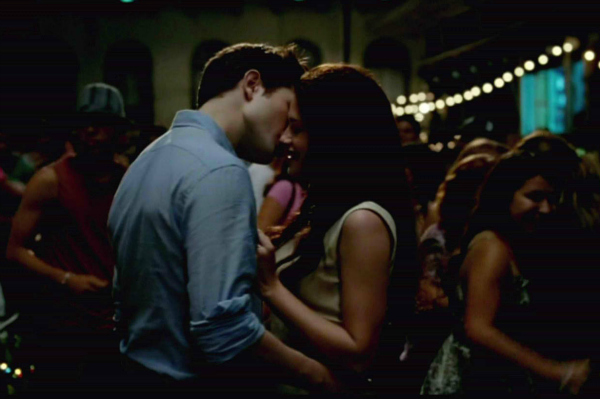 When Edward and Bella finally tied the knot in Breaking Dawn — Part 1, even the most stoic Twi-hards shed a tear. If walking down the aisle is in your near future, there are a few things you can do to ensure your big day will be just as special as that of Robert Pattinson and Kristen Stewart’s movie matrimony.

Rustle up a rustic locale 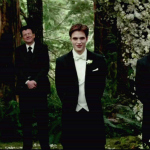 Edward and Bella held both their ceremony and reception in the forest outside of the Cullens’ Forks, Washington, home — among the towering trees that have served as a backdrop for many of their romantic interludes. Not only does a woodsy wedding site offer an ethereal feel, but it can be considerably less costly than a big budget venue such as a swanky hotel. Just make sure you have bug spray on hand… your guests probably won’t find it funny if you attribute massive mosquito bumps to getting into Twilight’s “biting” spirit.

In the Breaking Dawn book, author Stephanie Meyer describes a silver-tinged wedding day dripping in white blossom garlands — in total, the Cullens cover the celebratory site in 20,000 exotic flowers. But don’t go maxing out your budget by buying out all your local florists just yet! You can capture Edward and Bella’s dreamy floral feeling with far fewer buds… just place your fragrant picks in area of impact, such as along banisters and on the altar arch. If you’re going for authentic Twilight wedding details, you’ll want to order lilacs, orange blossoms, freesia and roses. Alternative ideas for white wedding flowers? Creamy astilbes, phalaenopsis orchids, Eucharis lilies, large peonies, mini calla lilies, ranunculus, hydrangeas, and dramatic dahlias. 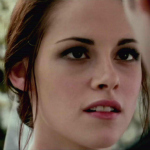 Take a cue from Bella and let love be the leading lady on your big day. Against simple, understated details, the shining star of the wedding is the depth of your feelings for each other. Before we incite a full-on Bridezilla debacle, let us clarify: This doesn’t mean the bride has to be a plain Jane. Sure, Bella’s Carolina Herrera gown was demure — but it was crafted by a big-name designer to be breathtaking in its simplicity, particularly when paired with wintery embellished Manolo Blahniks! Plus, you can shave a few more bucks off your budget by letting family take the hair-and-makeup helm like Bella did.

According to traditional wedding etiquette, the father of the bride picks up the tab for the wedding ceremony. However, since Edward’s undead family has amassed a small fortune over their centuries-long lives, we doubt small town police chief Charlie bore the brunt of Bella and Edward’s wedding bill. Most of us mere mortals, though, do rely on dear ol’ dad… or ourselves. To keep wedding costs from spiraling out of control, try not to indulge in your every wedding whim. Now, that’s not to say a girl can’t have her cake and eat it, too… literally! Bella and Edward may have been subdued in some of their choices — such as the venue and their classic attire — but they amped up the wow factor for crowd-pleasing favorites, including an enormous five-tier cake with a floral cascade. Make a list of what’s most important to you, and don’t sweat it if you spend a little more than you planned on those items. After all, unless you’re a vampire, you only live once.