With Breaking Dawn — Part 2 premiering Friday, Nov. 16, buzz over the Twilight series is deafening… and it isn’t coming solely from teenage girls. Unexpected celebrity fans like 50 Cent can’t wait to catch the franchise’s final flick either. 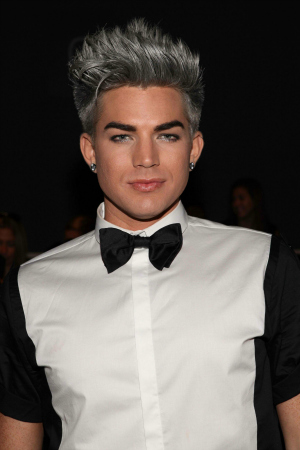 When it comes to the Twilight series, Adam Lambert wears his heart on his oft-shiny, sparkly, or crushed velvet sleeves. While a relatively obscure contestant on American Idol, the glam goth rocker fessed up to loving the Stephanie Meyer books — and he’s brought up his fandom in several interviews since.

Apparently in the club — poppin’ bottles full of bub’ — isn’t the only recreational venue rapper 50 Cent can be found. He must spend a little spare time at the movies, since he told MTV in 2010 that Twilight “ain’t no joke” and he wouldn’t mind adding Robert Pattinson to his G-Unit crew.

It’s hard to say which of Barack Obama’s jobs is more challenging: running the country… or running a household with two daughters. Fortunately, the commander-in-chief discovered that reading the Twilight books and discussing them with 14-year-old daughter Malia provides bonding time that doesn’t make him, like, totally embarrassing.

Stunning actress Rosario Dawson just can’t get enough of the Twilight tomes — in fact, she finds them dangerously addictive! “I just read the first book, it’s ridiculous, it’s like crack cocaine,” she told People magazine. “I read it for 10 hours straight until I finished it!”

Robert Pattinson and Kristen Stewart have become household names due to the Twilight franchise, but Dakota Fanning is no little fish herself! The talented actress — who became the youngest person ever to be nominated for a Screen Actors Guild Award for her I Am Sam role in 2001 — landed the role of a Volturi in 2009’s New Moon installment upon openly expressing her love for the series.

Emma, who is best known as Hogwart’s star student Hermoine Granger, lamented to Elle UK, “I love those books. This is so sad, but I literally felt depressed when I finished them because I thought, ‘Oh my God, what am I going to do now?’” Which is pretty much how the rest of us felt when Harry Potter ended.

She had a hit song titled “My Life Would Suck Without You,” but we get the feeling the self-professed “nerd Twilight fan” wouldn’t mind a little sucking in her life — if it came at the fangs of Robert Pattinson. Not only did she tell Ryan Seacrest that all girls were searching for their own Edward, but she also serenaded a cardboard cutout of Mr. Cullen during a show.

She may hail from a completely different clan, but Vampire Diaries star Nina Dobrev considers the Cullens part of the family. At the 2011 MTV Movie Awards, she explained, “I love the Twilight movies. I’m very happy that they exist because we exist because of them.”

Zombieland actress Abigail Breslin is just like any other red-blooded teenage girl: She’s got the hots for Edward Cullen. When she shook Robert Pattinson’s hand at the MTV awards last year, she celebrated by jumping up and down. But is the 16-year old a member of Team Edward of Team Jacob? She’s not saying! “I’m afraid to say, I’ll get attacked!”

No word yet on whether Kings of Leon singer Caleb Followill is going to pull an Obama and read the Twilight books with his new daughter, Dixie Pearl, but he has at least admitted to liking the vampire flicks. He told MTV News, “I really like Twilight a lot. It was a cool, generational kind of movie. I thought it was really pretty.”

Image courtesy of B. Dowling/WENN.com