Denise Richards’ Hurricane Sandy relief efforts have led to the adoption of one seriously adorable puppy. Due to her animal-loving nature, the actress is reportedly known to her friends as Dr. Dolittle. But to James Bond fans worldwide, she’ll forever be Dr. Christmas Jones. 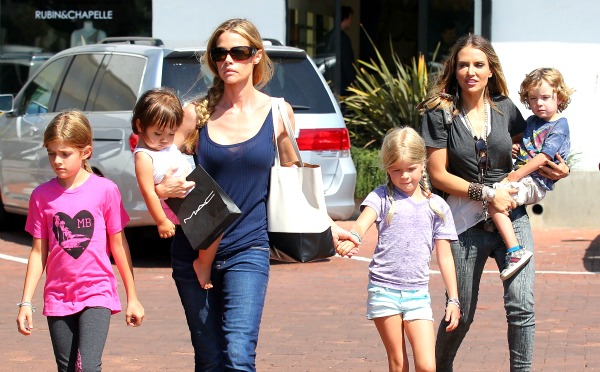 Denise Richards‘ three daughters have a brand-new puppy to care for, thanks to their mother’s big heart. The actress, seen here with Sam, Lola and Eloise, as well as Brooke Mueller and one of her sons with Charlie Sheen, just couldn’t turn down the opportunity to give one of Hurricane Sandy’s furry victims a new home.

A post on the Facebook page of one of New York’s no-kill shelters reveals, “Denise Richards visited North Shore Animal League America headquarters yesterday to provide vital help in spreading the word about our disaster relief efforts and encouraging adoptions. During their visit, Denise and her family fell in love with Tara the Labrador Mutt-i-gree puppy and welcomed her into their home!”

Denise Richards, nicknamed Dr. Dolittle by friends, told People in 2010, “I swear, if there’s a dog stranded somewhere, he finds my car, and he finds me. If anyone is looking to get a dog, they ask, ‘Can you help me?'”

The pooch, of course, has no idea she’s been lucky enough to be adopted into the home of a nuclear physicist — or at least the home of the actress who played one assisting James Bond in 1999’s The World is Not Enough.

With all of the Skyfall buzz circulating these days, USA Today recently decided to check in with Denise Richards and find out how she feels about her Bond role so many years later.

Past James Bond men who make us swoon >>

“I’ll be honest, I didn’t realize how big Bond was until I was cast and it was all over the news,” the actress, now 41, admitted to USA Today. “I had never seen James Bond when I screen tested and got the movie. Seriously. After I got the part, they were so sweet — they sent us all DVD players and a huge stack of the movies. I was so honored to be part of such an iconic franchise.”

“There’s not too many scientists who run around in little shorts with a tattoo,” Denise Richards said of Dr. Christmas Jones’ choice of attire. “So many people made fun of how I was dressed when the movie came out. That’s part of the appeal of Bond. These Bond girls are so outrageous, and if I did really look like a scientist, the Bond fans would have been disappointed.”

Having been a Bond girl buys the actress no special treatment at home, however.

“Today, my kids are too young to understand,” Denise Richards explained. “It was on TV a few weeks ago, and they had no interest in watching yet. So no, I’m not the coolest mom yet for being in a Bond movie. I was the coolest mom when I did an episode of Kickin’ It on Disney.”