Reese Witherspoon and Ryan Phillippe show other Hollywood families how it’s done. Yes, you can all just get along. 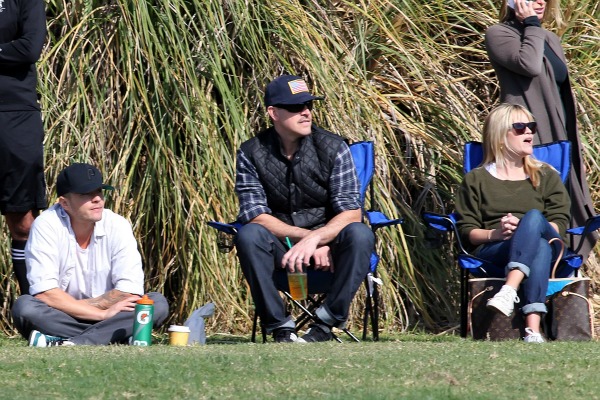 It’s nice to see blended families all get along, so add Ryan Phillippe, Reese Witherspoon and her second husband, Jim Toth, to that list.

The trio were seen rooting for Phillippe and Witherspoon’s son, Deacon, at his soccer game on Saturday. Toth and the Legally Blonde star brought their own chairs to comfortably watch the game, while Phillippe kneeled on the grass next to Toth. At one point, the gentlemen even shared a friendly handshake.

Witherspoon was married to her Cruel Intentions co-star for eight years, but they split amongst rumors of infidelity on Phillppe’s part. At the time, he was shooting Stop-Loss with Abbie Cornish, who was the supposed mistress. The duo wound up dating for two years.

Witherspoon has been married to Toth for almost two years. In late September, she gave birth to her first child with the CAA agent, naming him Tennessee James. It was her third child — she had daughter Ava, 13, and Deacon, 9, with Phillippe.

Little Tennessee James just made his public debut on Nov. 7, when the Sweet Home Alabama star was spotted taking a walk with her little bundle of joy in Los Angeles.

This isn’t Deacon and Ava’s only new sibling. Phillippe also became a father for the third time in July 2011, when former girlfriend Alexis Knapp welcomed a baby girl named Kailani.

While the blended family is definitely a mixed bunch, they are also a friendly bunch. Now if only LeAnn Rimes and Brandi Glanville could take a page from their family playbook.