Anne Hathaway is taking the sci-fi plunge. The Oscar-nominated actress has finally addressed those Robopocalypse rumors. Hathaway’s confirmed that she will star in Steven Spielberg’s big-screen epic.

Related story Anne Hathaway Works Hard to ‘Stay Present’ for a Healthy Work-Life Balance: ‘No One’s Forcing Me To Do Anything’ 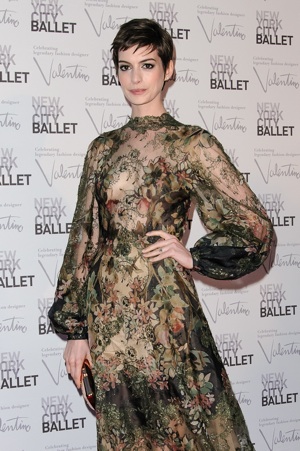 Anne Hathaway is keeping busy. Next month, she stars in the highly anticipated film adaptation of Les Miserables. In it, she plays the woeful Fantine, whose life is marked by one disappointment after another.

Fantine’s an interesting contrast to Hathaway’s confident and sexy Catwoman in last summer’s The Dark Knight Rises. So what’s next for the wide-eyed actress? Hathaway’s tackling science fiction with Steven Spielberg‘s Robopocalypse.

While speaking to Empire Magazine, she revealed, “If Robopocalypse happens I will be in it… I believe it’s quite real, though you never want to hang your hat on anything.”

According to Hathaway, the decision to star in the film was a no-brainer. “Whenever I’m taking time off, I always joke to my team that I’m on vacation unless Steven Spielberg calls. And I was on vacation and Spielberg called. So I was like, ‘OK, put my money where my mouth is.'”

Anne Hathaway up for Spielberg’s Robopocalypse >>

Who says positive thinking doesn’t work? Talk about speaking it into existence! If and when Robopocalypse begins shooting, Hathaway will be joined by Chris Hemsworth (Thor: The Dark World) and possibly Ben Whishaw (Skyfall). That’s a hot and talented young cast.

As for the immediate future, Hathaway’s spending her time celebrating her birthday. Nov. 12 is a major milestone for the actress: she turns the big 3-0. We still remember when she was the frumpy teen in The Princess Diaries. Oh, how time flies!