We were both sad and excited when we spotted Jake Gyllenhaal walking hand-in-hand with a mystery brunette. Doesn’t he know he’s supposed to be our boyfriend? 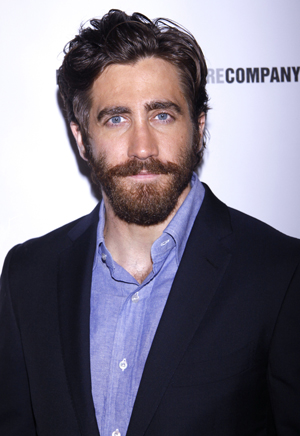 It’s a sad, sad day: Jake Gyllenhaal seems to have a new girlfriend. The End of Watch actor was spotted walking hand-in-hand with a new gal around New York City over the weekend.

The shocker? She’s not a Hollywood superstar like his exes Reese Witherspoon and Taylor Swift. In fact, we know absolutely nothing about the pretty brunette on Jakey G’s arm — other than that she looks pretty happy to be with him. And who wouldn’t be?

Gyllenhaal — currently in the city performing in the off-Broadway play If There Is I Haven’t Found It Yet — is notoriously quiet about his relationships, though it seems Swift isn’t done talking about him yet.

“Some combinations of people are toxic, you know? You have to find the right one that isn’t just going to explode into fiery ash and destruction,” she told Harper’s Bazaar for the mag’s December issue. Some fans think she’s most definitely referring to Gyllenhaal.

Swift also told NPR that she wrote the song “The Last Time” on her new album Red about that toxic relationship.

“My visual for this song is, there’s a guy on his knees sitting on the ground outside of a door. And on the other side of the door is his girlfriend, who he keeps on leaving, and he keeps coming back to her, but then he leaves again. He’s saying, ‘This is the last time I’m going to do this to you.’ And she’s saying, ‘This is the last time I’m asking you this: Don’t do this again.’ And she’s wondering whether to let him in, and he just wants her to give him another chance, but she doesn’t know if he’s going to break her heart again. It’s a really fragile emotion you’re dealing with when you want to love someone, but you don’t know if it’s smart to.”

So, should this new girl watch out for Jake’s sneaky ways? We’d be happy to take him off her hands.