Elmo puppeteer Kevin Clash admits the gay relationship, but says it was between “consenting adults.” He has taken a leave of absence in wake of the accusations. 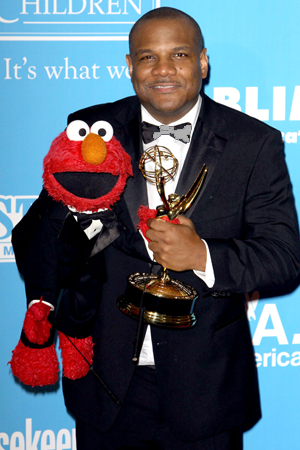 Kevin Clash, the disconcertingly statuesque fella who provides the voice of Sesame Street‘s toddler-friendly character Elmo, has been accused of carrying on a sexual relationship with a 16-year-old boy and has taken a leave of absence from his puppeteering duties.

As TMZ reports, “Sesame Workshop lawyers recently met with a 23-year-old man who claims he and Clash began a sexual relationship seven years ago… when he was 16 and Clash was 45. Clash has acknowledged to TMZ he had a relationship with the young man — but insists it only took place AFTER the accuser was an adult.”

Sesame Workshop lawyers, heh heh. That’s gotta look great on a business card. Anyhoo, the scandal apparently revved up in June of this year, according to TMZ, when the young man in question emailed Sesame Workshop honchos to accuse Clash.

Said honchos emailed and met with the accuser, who was apparently dissatisfied with the results, because he then engaged the legal firm Andreozzi and Associates, “the firm that represented one of the victims in the Jerry Sandusky child rape case,” TMZ tell us.

Sesame Workshop told TMZ that their internal inquiries concluded the accusations were fraudulent, though Clash was disciplined for using company email in an “inappropriate” manner. A statement issued Monday said that Clash used “poor judgment.”

Clash has taken a leave of absence anyway, which kinda looks weird.

Fox News quotes the Sesame Workshop statement: “Elmo is bigger than any one person and will continue to be an integral part of Sesame Street to engage, educate and inspire children around the world.”

Sure! And Pee Wee Herman had a great career after his sex scandal, too. Oh, wait. No.

Sesame Street is the latest weapon in the war on terror
Moms pushing to bring breastfeeding back to Sesame Street
Sesame Street‘s new Muppet struggles with poverty, hunger