The truth is a dangerous thing when it winds up in the wrong hands, but no one knows how to spin it better than Emily. 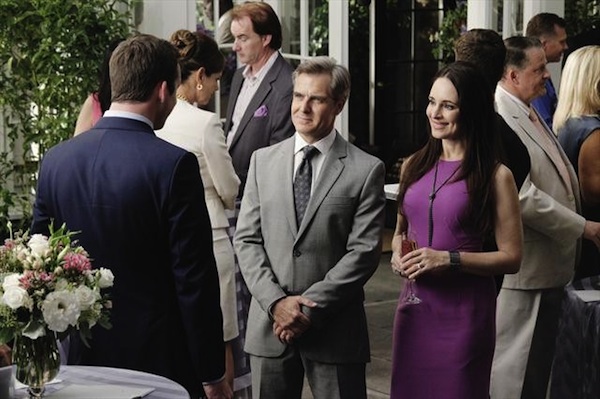 It was only a matter of time before writer Mason Treadwell (Roger Bart) realized that fake-Amanda (Margarita Levieva) and Emily (Emily VanCamp) were connected through their time in the detention center, but he wasn’t able to put all the pieces together right away. Instead, he believed the two were young lovers and that Emily is obsessed with Amanda Clarke and has moved to The Hamptons to seek revenge on her behalf. Despite Emily’s warnings to stay away from him, fake-Amanda really sells him this story to gain his trust and be alone with him so she can kill him.

Just when Amanda is about to take a crowbar (straight up gangster-style) to Mason’s head, Emily bursts in and stops her. She then reveals the truth to Mason that she is the real Amanda Clarke. His first book is the reason why her father has been viewed as a terrorist all these years and she blames him for everything she’s doing now. The two seem to come to an understanding, but he has no idea what Emily has up her sleeve.

Emily sets it up so Mason tells Kara (Jennifer Jason Leigh) that it is the safest thing for her to leave The Hamptons, but then he goes too far and tells her David was an innocent man who was set up by the Graysons. Kara hasn’t been taking her meds, so she isn’t handling the truth really well, and she’s ready to focus all her crazy on Conrad and Victoria (Madeline Stowe). 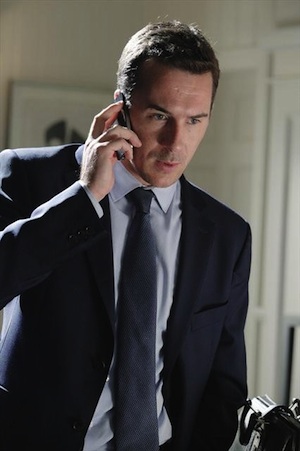 In the middle of yet another party at the Grayson mansion, Kara traps Conrad and Victoria, blindfolds them, gets them on their knees, and puts a gun to their heads. In a touching moment, Conrad holds Victoria’s hand. I think he would really love her if he didn’t hate her so much.

Just when it looks like the two have finally met their end, Aiden (Barry Sloane) sweeps in with a cloth full of chloroform and knocks Kara out and drags her away quiet like ninja. Later in the night Conrad and Victoria discuss that it must have been the Initiative that took Kara.

Aiden poses as an FBI agent and he and Emily are able to convince Kara that she should leave town for good… oh, and to take her meds again.

With Kara gone, Emily can focus on Mason. She frames him for Gordon’s murder and once he’s arrested (which also means Conrad is off the hook without the help of the Initiative), Emily tells him that if he confesses to the murder, she will allow him to write her entire revenge story. The story will be his legacy. And when she has completed her mission, she will come forward and exonerate him with her own confession. He actually agrees. A writer just can’t pass up a good story.

The best part of the episode: Emily jumps on Aiden at the end and they totally make out. The girl needs to let some things go and just be happy for second!