In a desperate attempt to keep Jane in New York, Henry plans to propose. But, will he be able to pop the question before The Drake gets to her first? 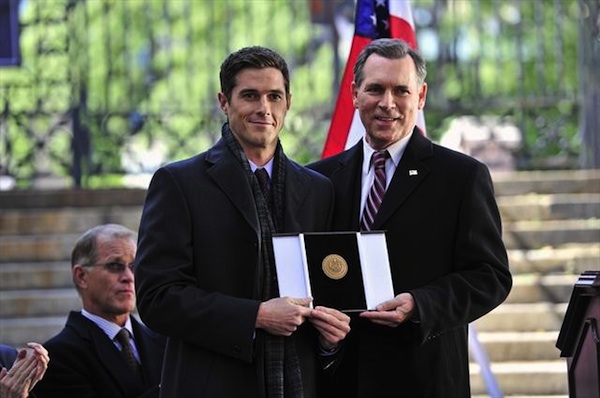 Buying an engagement ring is the answer to any relationship problem. At least that’s Gavin’s (Terry O’Quinn) advice to Henry (David Annable) when Jane (Rachael Taylor) decides she doesn’t want to live in the haunted Drake anymore, but wants to hop on the next flight to Indiana.

See, things are going really well with Henry. He’s being honored as a hero for the whole Kandinsky issue a few weeks ago and his political career is on the rise. He’ll be mayor in no time at this pace. So, Jane’s whole scaredy-cat attitude is really getting in the way of his plans. He’s also a good guy who loves her and wants to be happy with her, so he jumps at Gavin’s idea to propose, hoping it will solve all their problems.

In the meantime, Nona’s grandmother is suddenly out of her wheelchair and walking like a zombie around The Drake. After years of not speaking, she hoarsely whispers to Nona, “Don’t let Jane leave.” Nona’s on it immediately and uses her supernatural powers (which she most likely acquired when her mother gave birth to her in the dreaded Drake elevator) and jumps into Jane’s dream. Jane is finally figuring out that Nona has some very special “skills” and the two team up to figure out what’s going on in this crazy building.

Nona shows Jane a room filled with articles about murders and disappearing Drake residents that her grandmother began collecting before she got sick. In the room is also a picture of Jane from 1992 when she was 8 years old, which was taken in the Drake lobby. But, Jane never even left Indiana until high school and doesn’t remember ever being there. Nona says they are both, “children of The Drake.” That seems like a very unfortunate thing to be.

Olivia (Vanessa Williams) takes Henry ring shopping and actually offers to pay for anything over his budget. Of course, she’s taken him to a place where everything is over his budget. You have to wonder why this guy doesn’t think it’s odd that they are so generous. I mean, who buys someone else’s engagement ring? It would just be nice if he’d start to think things through a little more instead of being blinded by all the glitz and dollar signs.

When Jane and Henry are walking back to their apartment where he intends to propose, Nona pulls Jane away because her grandmother is missing again. They find her in the basement, where they figure out Jane’s necklace is actually a key to the mosaic tiling in the floor. When they place the pendant on the ground, the floor opens up to reveal a red winding staircase, Indiana Jones style. Brave Jane walks down into the abyss, but the floor closes and traps her underground while Henry is left in a candle-lit room wondering where she’s gone.

In other resident news, Brian finally gave in and slept with Alexis. Afterward, he figured out Lu didn’t sleep with the doctor, so he kind of screwed up there and he put it together that Alexis set it up to look like Lu cheated. Looks like it’s all a little too late though, because that devilish man-stealer just moved into The Drake and is planning on making his life a living hell.