The singer has become involved with the relief effort for Hurricane Sandy and is getting her fans involved as well, even if she has to bribe them with some new music. 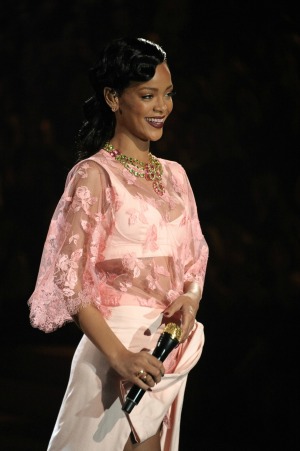 When Rihanna releases an album, it’s an event. Not only did the singer plan a listening party this week, but she announced a worldwide tour followed by a months-long, nationwide tour. But she is pushing some of that aside to help others.

Friday night, Rihanna decided to preview her album for some fans, in return for donations for the Hurricane Sandy relief effort. The event was held at Jay-Z‘s 40/40 club, and the New York Daily News‘ relief effort collected the items that Rihanna’s fans donated to the cause.

“Everybody’s asked to donate blankets and bleach… they want cleaning [supplies], brooms, [and] sleeping bags. And they get to listen to the album if they donate that stuff,” Rihanna said, according to The Huffington Post.

The event is normally free, but Rihanna decided to take the opportunity to donate to the cause that she obviously feels so passionate about.

“Now is the time for us to come together and do whatever we can to aid those in need,” Rihanna told the New York Daily News to promote the event.

She also announced she would be donating 1,000 sleeping bags to the effort, as well as $100,000 to the Food Bank for New York City.

“It’s really difficult to see something so tragic going on and not be able to do anything about it,” she told Andy Cohen on a live Facebook chat on Thursday, according to The Huffington Post. “There’s nothing you can control — it’s Mother Nature. It’s really sad what happened here.”

Rihanna showed up at the event as well, offering one more reason to come out and donate. Her album Unapologetic will be out Nov. 19.

Other stars are doing what they can to help the effort as well. Justin Bieber announced through his Twitter account that for his shows in the area, he would donate $1 to the cause for every ticket sold. Lady Gaga also donated $1 million.

“If it wasn’t for NYC: the Lower Eastside, Harlem, the Bronx and Brooklyn, I would not be the woman or artist that I am today,” Lady Gaga said when announcing her donation.