Rihanna and Chris Brown’s new duet, “Nobody’s Business,” has the rumor mill abuzz about their mysterious relationship, but the tumultuous twosome are sticking to their “we’re not dating” guns. In the spirit of duets between dueling celebs, we propose the following collaborative musical efforts. 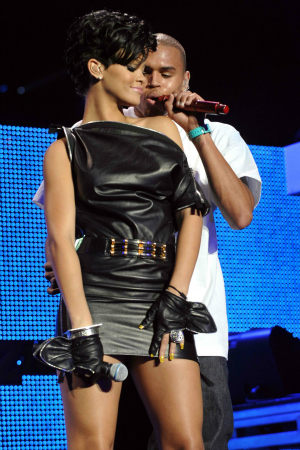 After Mitt Romney proposed sending Big Bird and his fellow PBS stars packing to help cut budgetary costs, the flightless Sesame Street fowl popped up everywhere, from television ads to internet blogs. Now that the election is over, we think a duet between Obama and Romney could be therapeutic. Set to the tune of the classic Frankie Valli and the Four Seasons song “Big Girls Don’t Cry,” Baromney’s single — “Big Birds Don’t Cry” — could capitalize on the popularity of this political meme by espousing an important lesson: What’s done is done. We’re positive Big Bird would have retained his trademark optimism if Romney had given him the axe, so Romney should likewise realize there’s no sense crying over flaky voting constituents.

Obama beats Romney: Who’ll play the politicos in a movie? >>

“Once, Twice, Three Times a Liar” by Lindsay Lohan and the L.A.P.D.

How does that old saying go? “Fool me once, shame on you — fool me twice, shame on me?” The things the troubled Lohan has falsely sworn to include being sober, not shoplifting, not violating her probation and — most recently — not being in the driver’s seat when plowing into the back of an 18-wheeler. Too bad the truck driver asserts he saw the teetotaler hop into the passenger’s side before the Five O arrived, and now LiLo faces criminal charges that may actually end up in her serving jail time.

There’s no doubt Lindsay Lohan is once, twice, three times a liar… and then some. Perhaps if she hits the stage with the L.A.P.D., they’ll feel a little less “shame” over being fooled by the celeb so many times.

Lindsay Lohan is wanted for lying to the cops >>

Airing all her dirty romantic laundry via her music seems to work for Taylor Swift, so perhaps Robsten should give it a try. Taylor is constantly casually dating someone, then very publicly breaking up with said someone, then setting their failed relationship to music. Rob and Kristen‘s cycle keeps repeating as well… except that instead of moving on to other celebs, the pale-skinned pair continually hook up and break up with each other — over and over and over. Not even a messy cheating scandal could keep the clingy couple apart for long. So, maybe if they steal a page from TayTay’s playbook and sing a duet about their tumultuous bond, they can kick their nasty little habit of each other for good. After all, it always seems to work for Miss Swift.

Ever since J.Lo and Steven Tyler bid the American Idol judges’ table sayonara, trouble has been a-brewing on set. The show’s producers quickly nailed down pop legend Mariah Carey to warm one vacant seat, and almost as quickly, they miffed Mariah by signing on wildcard rapper Nicki Minaj. In the blink of an eye after saying goodbye to J.Lo’s booty, the once-amicable Idol set morphed from playful jabs to one step shy of throwin’ ‘bows.

However, since Carey just released an Obama-inspired ballad, we think the singer should set a good example for her beloved president and his ex-opponent by putting her animosity toward her own rival behind her. The riff, which would also reassure fans of the Fox show that all is well, could be titled, “It’s All Good in the Idol Hood.” Subtitle? “B****** Be Crazy.”

Mariah Carey sings a song of victory for Obama >>