Kirstie Alley goes on Jimmy Kimmel Live! to try to to set the record straight about her “affairs” with John Travolta and Patrick Swayze. 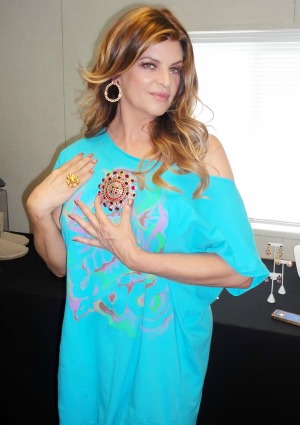 Kirstie Alley has been making a lot of noise this week, not for her performance on Dancing with the Stars, but for a few chapters in her new book, The Art of Men.

The actress stopped by Jimmy Kimmel Live! on Thursday to promote her new tome and to clarify a few salacious stories being passed amongst the tabloids. The 61-year-old set the record straight to the late-night talk show host.

In her interview with Kimmel, she said, “Can I just clarify, these were not sexual affairs. I think John Travolta is and has remained one of my best friends for almost 25 years, 26 years…. before he was married [to actress Kelly Preston], and I was married. But I fell in love with him.”

The two actors met during the filming of the 1989 movie Look Who’s Talking, and the reality show star said that they now have “the most brilliant friendship.”

Alley also mentioned that she has a close relationship with Travolta’s wife.

Things were a bit stickier with Patrick Swayze, whom she met on the set of North and South in 1985. They engaged in an emotional affair while they were both married. He was married to dancer Lisa Niemi until his death in 2009 from pancreatic cancer, and Alley was married to actor Parker Stevenson until they split up in 1997.

While the Cheers alum is “proud” that she never slept with Swayze, it has to be tough for the deceased actor’s widow to hear this news.

It doesn’t seem as if Alley has lost any sleep over her revelations, though.

As she told Kimmel, “My mother told me I would be a whore if I didn’t marry someone I had sex with, so I was trying not to be a whore.”

OK, whatever works for you, Kirstie.