Taylor Swift continues the promotional tour of her new album, Red, with an appearance on FOX Television’s The X Factor. 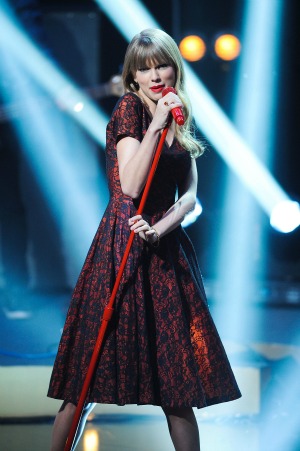 If you haven’t had enough of Taylor Swift yet, don’t worry, there is more coming your way very soon. The best-selling country artist — who is promoting her latest album, Red — will be heading to your television next week.

Swift, who appeared on Dancing With the Stars last week, is headed to another competition show, this time of the vocal variety. The 22-year-old will appear on FOX’s The X Factor on Thursday, Nov. 15.

She will perform her latest single, “State of Grace,” for the first time on television, so it will be a fresh appearance for the singer and her fans. The song comes from her fourth studio album, Red, which has sold over 1.2 million copies since its debut in late October.

The Grammy-winning artist’s performance on the Simon Cowell show comes at a critical time for the FOX network because it is happening in the middle of November sweeps. This marks the time when networks measure ratings and set advertising rates for the next quarter.

Swift’s appearance will be on the ever-important results show, as Cowell and network executives are looking for a massive ratings boost. Even with retooling the hosts and judges panel this season, the show has struggled against newer competitor The Voice.

If Swift and the other huge musical guest, One Direction, can bring viewers and ratings into play for the show, then maybe Cowell will be less cranky for the second half of the season.

The X Factor airs on Wednesdays at 8/7c, when the performers take the stage. The results show happens at 8/7c on Thursdays, on the FOX network.