Skyfall‘s Daniel Craig reveals his similarities to James Bond and tells us why he wasn’t worried about critics.

When Daniel Craig decided to take on the iconic role of James Bond, he was met with a lot of harsh criticism. Fans felt the 5’10” blond actor didn’t fit the typical “tall, dark and handsome” Bond persona.

But in the latest Bond installation, Skyfall, the 44-year-old actor proves them wrong for a third time, giving an outstanding performance as the famous spy. Still, the actor says he never let the criticism get to him. 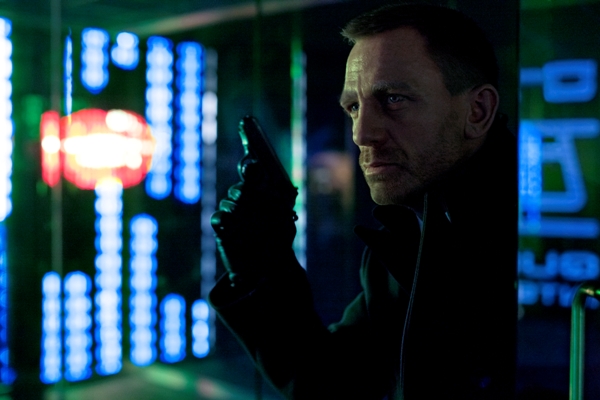 “[I like mine] straight up, with an olive or two, or three,” said Craig. “He likes gin martinis and there’s a Sean Connery film where he has it stirred, as opposed to shaken. I don’t think he really cares as long as it’s good, it’s the right company, and the sun is shining. He’s happy.”

Another pleasure Craig shares with Bond is cars.

“The DB5 is the best gadget,” Craig said of the Aston Martin he got to drive in the film. “I’d like to have one of those.”

The silver sports car was first made famous in Bond films by Sean Connery in Goldfinger. Craig got to play around with the car’s features in the film, threatening to eject Judi Dench‘s character in one scene.

Along with Dench, Craig also enjoyed sharing the screen with his co-star and new Bond villain Javier Bardem.

“He’s just a phenomenal actor,” said Craig. “He just raises the bar and everybody has to raise their game to be around him. He’s just a lovely, charming man. [He’s] very, very funny and committed, and a huge Bond fan. He made a really funny, creepy Bond villain.”

Craig is signed on for two more films, which will bring the grand total of Bond movies to 25. So what would he like to see happen to the legendary agent next?

“Anything,” he told us. “Absolutely anything.”

Be sure to catch Daniel Craig as James Bond in Skyfall in theaters today!