George Clooney will never marry Stacy Keibler – but that doesn’t mean he’s gay, says his sister in her first-ever interview. 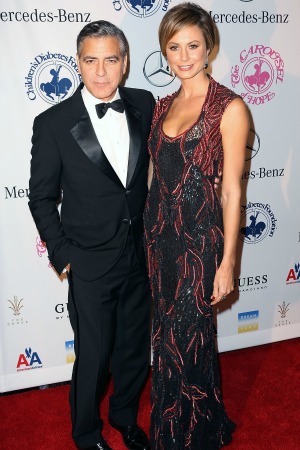 George Clooney loves living the swingin’ single life, so that totally means he’s gay, right? That’s what the rumor mill would have us believe.

Despite dating a bevy of beauties throughout the years, the once-divorced Clooney has yet to settle down again, and despite the fact that the lifestyle sounds like every hetero guy’s dream, the rumors that it’s a front for his supposed gay lifestyle continue to dog him.

Now his sister is going on record to set us straight.

Adelia Zeidler finds the gay rumors absolutely laughable and says her brother’s famous reluctance to remarry is merely caused by his commitment to his career.

“Yes that’s quite ridiculous, we don’t even listen when people say things like that anymore,” she told the Daily Mail.

And besides, Clooney’s love ’em and leave ’em act is nothing new — he was doing it in high school!

“I think he was always pretty fair and honest with the girls he went out with. I don’t recall any of them feeling as though he had just broken their heart and dumped them unexpectedly, I think most of the relationships came to a kind of natural close. I don’t recall any angry phone calls or anything like that.”

So basically, neither we nor current flame Stacy Keibler should hold our breath that Clooney will ever tie the knot again (he split from first wife Talia Balsam in 1993).

“No, I would say he probably will not get married,” his sister mused. “If I had to guess I would have to say no. I know everyone says, ‘Well Warren Beatty said he’d never get married and then he met Annette Bening’ but you know that’s the only example people can think of, so it doesn’t bode too well.”

It does not bode well, indeed.