Admit it. You’re kind of giddy that today is the U.S. premiere date for Skyfall. We knew it. Same here. There is something about Daniel Craig that will put our a**es in the seat for as long as he wants to play Bond, even if it means we have to tolerate the token Bond girl. We felt it was our civic duty to encourage your Craig crush with a few fun facts about Danny Boy… 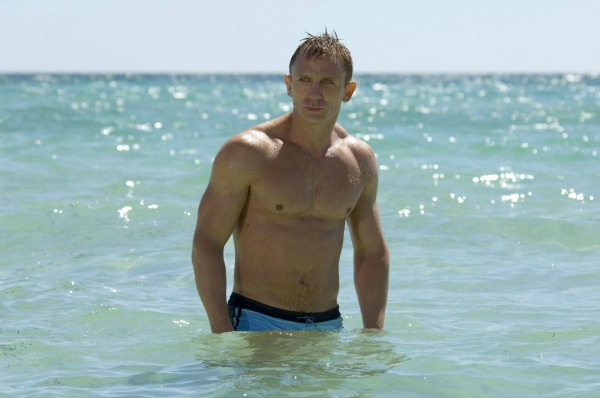 When it comes to stunts like hanging off a helicopter rail over the ocean, Craig is anything but vertically challenged. Physically however, this Bond boy is 5’ 11”. That doesn’t make him a slouch in the height department, but it does make him the shortest actor to play Bond. But are we really looking at his height in these movies ladies? Uh, no. We’re a little too preoccupied with his rippling pecs and piercing blue eyes to give a rip how tall he is.

Skyfall may be headed for record-breaking weekend >>

No love for reality TV

A year ago, Craig popped off to British GQ about reality TV and verbalized his contempt for the Kardashians. “What, you mean all I have to do is act like a f***ing idiot on television and then you’ll pay me millions?” Here, here. You gotta love a guy who’s got the stones to say what everyone else is thinking. The Kardashians, who were likely too busy hauling their bounty to the bank, didn’t really respond other than Mama Kardashian (Kris Jenner) saying a “real man would apologize.” Apologize? For what? Speaking the truth? The real reason the Kardashians left this alone is because Craig has a license to kill. Der.

Kris Jenner to Daniel Craig: A “real man” would apologize >>

Daniel Craig secretly married his then-girlfriend Rachel Weisz, in June 2011, fracturing the hearts of women worldwide. So was it the hopeless romantic in Craig that made him whisk gal-pal Rachel off to the altar with only four people in attendance? Or was it his fierce protection of his privacy? When asked about his marriage in an interview, Craig shifted uncomfortably and said it was “great” — his body language saying loud and clear that he wasn’t going to elaborate. We’d love to say something unfair and cutting about Rachel Weisz, but alas, we can’t. She’s gorgeous and talented and blah, blah, blah, so we naturally hate her. Just kidding, of course! When an actor proves he can commit himself to a monogamous relationship, it just makes him sexier somehow.

Can you believe that not everyone loves Daniel Craig as Bond? That he actually has detractors? How is that even possible? He told Entertainment Weekly that “die-hard fans hate him,” and that they don’t think “he’s right for the role.” Huh? What ails these people? Are they blind? Deaf? Did they not see him shirtless in Casino Royale? (Please feel free to pause here, scroll to the top of the page, and play “Dreamweaver” in your head whilst you admire Craig’s fine-ness). Welcome back. Craig is by far the hottest Bond of our generation. The end.