We couldn’t imagine how this strange and wondrous best-selling book could be turned into a movie. But director Ang Lee (Crouching Tiger, Hidden Dragon, Brokeback Mountain) exceeds our wildest expectations when a young man gets shipwrecked on a lifeboat with one very vicious, very hungry wild tiger. Oh, and did I mention it’s a spiritual journey for both? 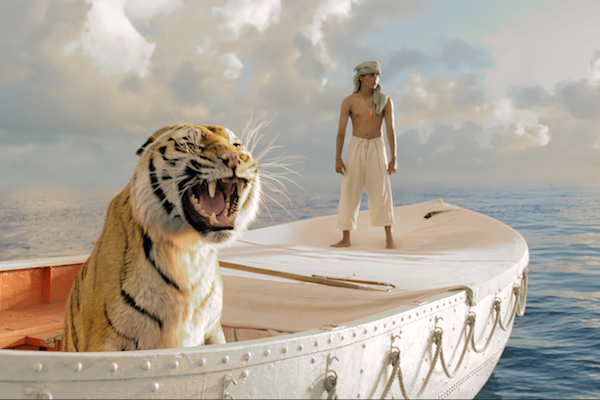 4.5 Stars: Perfect for those on a spiritual journey of their own

The story begins in the “French Riviera of India,” with a young boy, Picine Patal (Ayush Tandon, Suraj Sharma and Irfan Khan at different ages), who is named after a Parisian swimming pool. After much teasing at school (“Picine” sounds a lot like “pissing”), he shortens his name to Pi, taking full advantage of the mathematical implications.

Life is relatively peaceful in India, especially at the zoo Pi’s father owns and operates. Then when the family adds a tiger to their menagerie, the story takes on a deeper meaning.

Just to be clear, the tiger in this film isn’t the kind on a cereal box. Richard Parker, as the Bengal is called, is a ferocious carnivore to be feared at all costs. Pi Patel learns this the hard way when he decides to befriend the beast.

When zookeeper dad discovers his son’s dangerous plan, he forces the child to watch the tiger eat a live goat through the bars of its cage. Luckily, Ang Lee spares us the visuals, but the violence of the incident feels very real. In one day, Pi goes from a trusting, innocent child to a wary, worldly adult. For the most part, this is a good thing, but it’s not without reprecussions. 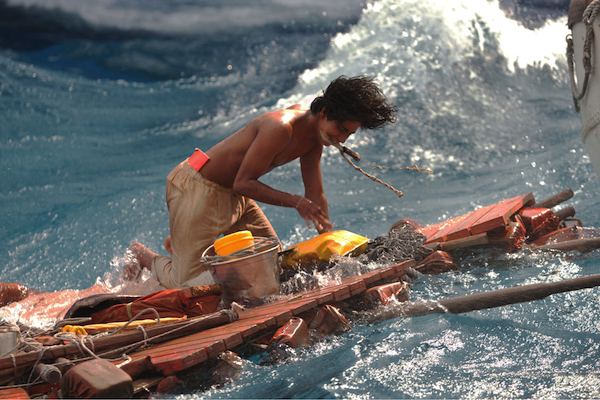 When trouble brews in Indian politics, the Patel family decides to flee to Canada, where they can sell all their exotic animals at a profit. Pi, a spiritually adventurous lad, claiming to be a Hindu, Christian and Muslim all at the same time, isn’t eager to leave his homeland or first love (Shravanthi Sainath). Ultimately, though, Pi knows his father is doing what he thinks is best for his family.

As the family sails to North America on a small Japanese boat with a cruel French chef (Gerard Depardieu) and a Noah’s ark’s worth of creatures, disaster strikes. A Hurricane Sandy–sized storm capsizes the boat and expels Pi, a wounded zebra, a hyena and an orangutan named Orange Juice onto the same small life raft. Obviously, this is going to be a gruesome dynamic with survival not guaranteed. 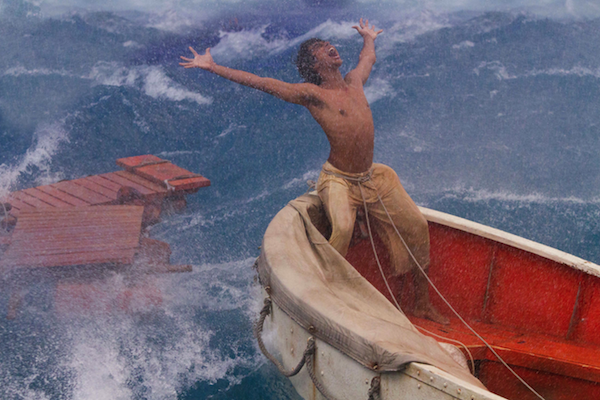 As Pi and the tiger square off, then learn to survive in spite of each other, eventually rely on each other and finally maybe even love each other, it becomes clear this story is not unlike the difficult spiritual journey we are all forced to make.

Bottom line:  Life of Pi delights cinematically with its breathtaking seascapes and turbulent shipwreck. Expect to scream, laugh and maybe even cry. Enjoy!