Everybody’s got something to say about the 2012 election, including Ted Nugent. Depending on how you cast your vote this year, you quite possibly could be among those the rocker has classified as a pimp, whore, and/or welfare brat. Isn’t that lovely? 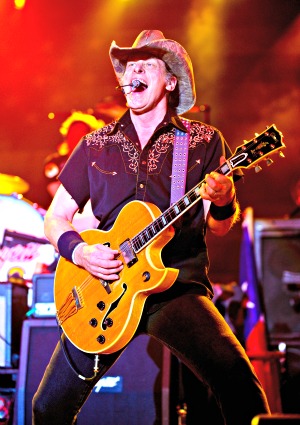 Ted Nugent’s take on the election comes with a few choice insults sprinkled into a verified rant. The rocker, none too happy with Obama being given four more years, not only let loose on the voters who disagreed with him but predicted a dismal future for the country as a whole.

This journey to the center of Ted Nugent‘s mind comes courtesy of Twitter, where anyone can rant and rave to the world via social media in 140 characters or less.

“Goodluk America u just voted for economic & spiritual suicide,” Ted Nugent concluded, sounding as though he may be considering separating himself from these United States. “Soulless fools.”

One day before the “pimps, whores & welfare brats” took to the polls, the 63-year-old turned to a higher power to plea for Barack Obama not be reelected. On Nov. 6, Ted Nugent tweeted, “Dear God in heaven America vote Mitt Romney Paul Ryan Republican and save America.”

So far, no one seems to be taking Ted Nugent’s election rant all too seriously. In direct reply to his characterization of Obama voters, one person tweeted simply, “Um, wow.”

A second, responding to the “whores” descriptor in particular, replied, “1, we prefer ‘hoes.’ 2, HAHAAAAHAAAAA.”

A third, apparently all too aware other celebrities have also lost their cool over the election, chimed in, “And I thought Trump was bad…”

Are you insulted or offended by Ted Nugent’s election tweets?