Miley is right in the middle of wedding planning, so the talk show host wanted to remind her what it’s like to be a future bride, complete with two strippers. 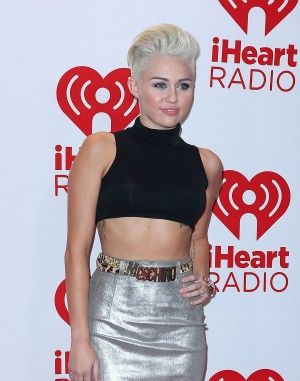 Miley Cyrus appeared on the Ellen Show on Thursday and got the surprise of a lifetime. The soon-to-be bride was given a sort of bachelorette party by the talk show host.

“Cyrus, 19, was focused on telling host [Ellen] DeGeneres about her upcoming wedding when a spark suddenly flew from the corner of the stage,” said the NY Daily News. “Startled, Cyrus quipped that she thought the noise was ‘a surprise bachelorette party or something.'”

DeGeneres also asked Cyrus about how the wedding planning was going, which the actress has kept super-secret before now. But Cyrus said the details are taking a lot of time and she didn’t realize how long it would take to plan a wedding.

“I’m so focused on my record that I don’t want to be between touring and trying to plan all that, and I really didn’t realize until I got a wedding planning book what you have to decide on,” she said. “Like, I don’t care what color the napkins are, to be honest. I really don’t care. It’s a lot of weird detail. And I don’t want to be doing too much and be too crazy and forget about the moment of it all.”

But through it all, she has remembered the most important part is the relationship, and the actress knows she has that.

“It has to be perfect,” she told DeGeneres, according to the NY Daily News. “It has to be like a soundtrack in a movie. That’s the one day that movie crap is real. That romance. That look is the time that you get that… I’ve been to probably 10, 20 weddings, and I’ve seen that real look five, six times. It’s rare that people just stop to really look the person in the eye and know that this is your life together.”