When you were 26, could you say you were on a hit series, doing commercials for gaming legend Nintendo and starring in a movie with renowned actor Robert De Niro? 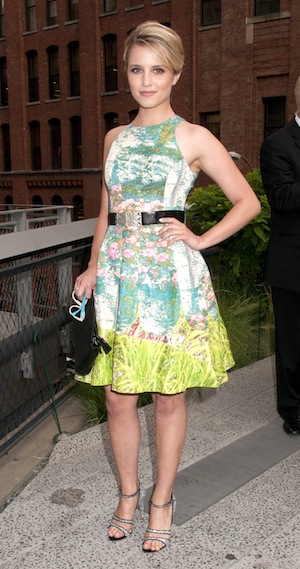 Dianna Agron is a refreshing and talented Hollywood actress, isn’t she? With her classic style and beauty, along with her undeniable talent, she has had many successes already at such an early age.

She earned her claim to fame with Glee, then she scored a box-office success with I Am Number Four, and now she’s in the upcoming movie Malavita with Robert De Niro, Tommy Lee Jones and Michelle Pfeiffer. She is also now a part of Nintendo’s “Play As You Are” campaign for the Nintendo 3DS device, which seeks to attract a more diverse market by highlighting unique interests.

SheKnows was delighted to get the opportunity to have a conversation with Dianna about all the high-profile projects she’s working on. We were pleasantly surprised at her eloquence, articulateness and humility. She gave us authentic and honest glimpses into her personality and preferences, also highlighting her belief in a work-life balance.

On Nintendo’s “Play As You Are” campaign for Nintendo 3DS

She Knows: You are now working on a campaign commericial for Nintendo’s “Play As You Are,” and you are the face for two of its games: Art Academy and Professor Layton and the Miracle Mask. Why do you think Nintendo found you?

Dianna Agron: I think the interest was mutual. I grew up playing Nintendo with my brother — we even had the black and white handhelds.

SK: I hear you connect really well with the Art Academy game because of your artistic interests. What is your favorite feature of that game?

DA: You really can apply lessons/techniques that you would do in real life in that game. You don’t sit in a class with a teacher — the game is your teacher, and you can practice on the tablet. It gives you the tools you need and the understanding for the techniques.

SK: I understand that Professor Layton and the Miracle Mask is an adventure game. How does that relate to you?

DA: Sometimes — when you have long, stressful days — you have to find things you can escape and have fun with.

SK: What age groups will this game appeal to?

DA: Everyone would love this. I mean, who doesn’t love learning or playing puzzles? Besides, it’s tiny, cute and fits in your purse!

SK: Do you have one [a Nintendo 3DS] in your purse right now?

SK: What is something you have to have in your purse when you travel?

On her film Malavita

SK: Speaking of traveling, you traveled recently to France to film Malavita. What does the title mean?

DA: “Bad life,” in Italian. It’s about a family of Italians who were going to be put in jail, and Tommy Lee Jones plays the FBI agent keeping them safe while in Europe. It is a comedy/action/thriller, and funnier than I thought it was going to be when I read through the script. It was a dream to be over there for three months and to make [France] another home. Great experience.

SK: What were your first impressions of De Niro and Tommy Lee Jones?

DA: They’re like dads — and we did play a father/daughter in the movie. They were very giving in sharing experiences and giving insight.

SK: Do you remember what you first said when you met De Niro?

DA: I said two words, and then we did a read-through in New York. I remember staring at all the details of all the paintings he had hung in his office.

SK: Tell us about how your role in Malavita is similar to or different from ones you’ve done in the past (like in Glee and I Am Number Four).

DA: It’s very different. She’s a dreamer, with her head always up in the clouds. But she has a violent streak that she doesn’t recognize because she grew up with it. People will not want to mess with me after this movie — but I’m sure the camera really helped me because I looked pretty badass in [the film]!

SK: Which of the roles you have played is most similar to the person you really are?

DA: I don’t think any [of them is], to be honest. You find emotions within yourself that you bring to any character, but I’m pretty kooky, and nothing has really showcased my true self yet.

SK: You’ve played alongside some good-looking talent. Who has been your hottest co-star?

DA: Yeah, and I didn’t realize how cute the boys on Glee were. Everyone’s so jacked now, after coming back to the set! I’ve been watching them [grow] from boys to men.

SK: I hear you love to cook. Do you also have time for a social life and a love life?

DA: Oh my goodness, you know you have to make time for everything. Everything in moderation — you can’t work too hard without playing — but I do [make time], definitely, for my friends and my dog.

On her experiences — past, present and future — with Glee

SK: Speaking of love, you were my favorite girlfriend on earlier Glee seasons — your character went through so much. Which storyline of Quinn Fabray’s did you enjoy doing the most, and why?

DA: I loved doing the Prom Queen and Rocky Horror. I wish it would have lasted longer. I like extreme transformations — its fun to play dress-up and go through changes.

SK: I hear that you were shocked when you got the part on Glee and that they initially wanted you to be sexier for your follow-up audition. What did you end up wearing for it?

DA: It was the exact same dress. I don’t like to incorporate [the term] “sexy” into my life at all — it’s not the girl that I am. It was my lucky audition dress, and I didn’t have money for many things, so that didn’t change.

SK: Who were you most excited about working with this season — Sarah Jessica Parker or Kate Hudson?

DA: I actually didn’t get to work with either of them!

SK: What will be the biggest incentive/transformation we see in your character when she reappears this season?

DA: I think [it will be] the camaraderie between the new cast and the old cast. Being the “leader,” you’ll be able to see some great interaction.

We’re looking forward to watching Dianna’s comeback on Glee and her intriguing role on Malavita. And make sure you check out those Nintendo games — they’ll make great presents for the holiday season!