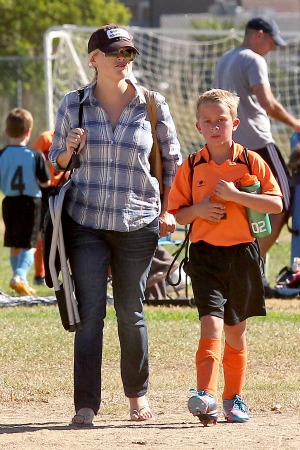 While many celebrities debut their new bundles of joy on entertainment magazine covers or Twitter, Reese Witherspoon has done a pretty good job of keeping her new addition under wraps… until today.

The paparazzi caught the momma of three with her adorable baby boy out on a walk around Los Angeles on Wednesday, and People posted the photos today. Tennessee James Toth, named for the actress’ home state, was born in September, but he has been a little shy when it comes to the press.

Witherspoon has been very protective of her newborn when taking him out in public. The most the paparazzi has seen of little Tennessee is covered up under a baby blue blanket in the back seat of his mother’s car.

Like any good Hollywood offspring, the little one was fashionably dressed in a navy blue outfit accented with green stripes as he was cuddled by his Legally Blonde star mother.

Even though the actress has a newborn, she has been seen out and about in Los Angeles quite a bit since the baby arrived. Witherspoon has been spotted at her older son’s soccer games and at the recent opening of the Rag & Bone store with her longtime pal, Cameron Diaz.

While this is the Oscar-winner’s third child, it is her first baby with husband Jim Toth, who is a Creative Artists Agency rep. Her two other children, daughter Ava, 12, and son Deacon, 9,  were born during her first marriage to actor Ryan Phillippe.

The Walk the Line star will next appear on the big screen in Devil’s Knot in 2013.