The Hunger Games actress Jennifer Lawrence says that her strong, healthy body is actually obese by Hollywood standards — but she refuses to cave under pressure to be a stick figure. 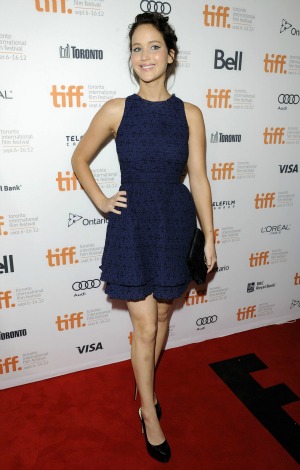 Jennifer Lawrence has one of the best bodies on the big screen today, but according to this 22-year-old, Hollywood sees her as a “fat actress” in comparison to the walking sticks we’re used to seeing.

In an interview in the December issue of Elle, Lawrence said she’s happy with her healthy body exactly how it is.

“In Hollywood, I’m obese. I’m considered a fat actress,” The Hunger Games star told the mag. “I’m Val Kilmer in that one picture on the beach.”

“I eat like a caveman. I’ll be the only actress who doesn’t have anorexia rumors.”

And she doesn’t see that changing any time soon.

“I’m never going to starve myself for a part,” she said. “I don’t want little girls to be like, ‘Oh, I want to look like Katniss, so I’m going to skip dinner.’ That’s something I was really conscious of during training, when you’re trying to get your body to look exactly right. I was trying to get my body to look fit and strong, not thin and underfed.”

Of bigger concern to Lawrence is her big fat mouth, which she said tends to get her in trouble.

“I never know what’s going to come out of my mouth, and it’s horrible,” she revealed. “I don’t find it positive in any way. When I get older, I’ll be more mature and poised. And I’ll have control over my mouth. One day, I’m going to grow up…When we leave, I’m going to have a knot in my stomach. I’m going to be like, ‘Oh, did I say something wrong? I’m going to get in trouble!'”

Look for the actress in the upcoming flick Silver Linings with Bradley Cooper, in theaters everywhere Nov. 21. The December issue of Elle is available on newsstands Nov. 13.