Brooke Burke-Charvet reveals that she is battling cancer in a video to her fans. 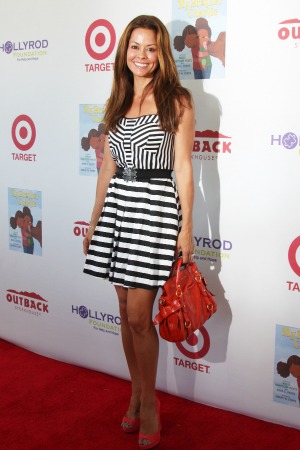 Dancing with the Stars co-host Brooke Burke-Charvet revealed some sobering news today on the ModernMom website: She is battling cancer.

The host went for her annual physical when her doctor noticed a nodule on her thyroid. After a series of tests and a second opinion, the medical experts all came to the same conclusion — that that the issue needed to be dealt with immediately.

In the video, Charvet revealed, “I need to have thyroid surgery and a thyroidectomy. Which means I’m going to have a nice big scar right here across my neck.”

The former Wild On… star was very clear that she wanted all of the health information to come from her so her fans would have the correct information. The video was her savvy way of controlling how the news reached the public and the media.

Even with her diagnosis, she seems to be in great spirits. Charvet said, “I feel really good and actually I’ve never felt better.”

Tom Bergeron‘s co-host already has the surgery scheduled, which will most likely happen after Season 15 of DWTS wraps in a few weeks.

The mother of four has always been into fitness and health, so her positive attitude appears to be carrying her a long way.

She says, “I’m going to be fine. And I feel really really strong. Doctors say this is a good kind of cancer to have. Good cancer! That sounds so crazy. But my doctor did tell me this is a happily-ever-after ending kind of thing. I’m going fight through this.”