Rayna James writes on her own, Avery screws up a huge opportunity for Scarlett and Juliette’s mama goes to rehab. That’s this week’s Nashville in a nutshell — let’s break it down. 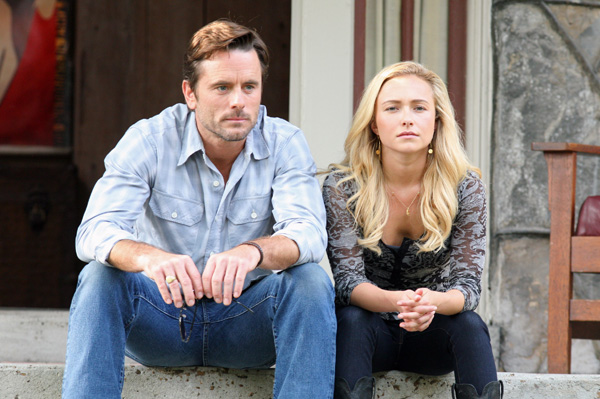 Apparently Juliette Barnes’ (Hayden Panettiere) theft scandal is not much of a worry anymore, because this week’s episode was focused squarely on Juliette’s junkie mother. At the studio, Juliette balks when Deacon suggests that he — as an ex-addict — talk to her mother.

However, the pretty songstress promptly changes her mind when she comes home to find her mom passed out in bed with some stringy haired weirdo. Juliette laments to her bodyguard/spiritual advisor that she doesn’t know what to do about her mom and he suggests getting someone else to help.

Enter Deacon. He comes to Juliette’s house to do an intervention with Juliette’s mama, but she’s too busy fawning over Deacon to care. Eventually she gives in to Deacon’s strong suggestion that she go to rehab.

But when they get to the center it’s obvious that this junkie isn’t ready to give up her past. A bottle of pills drop out of her purse and Deacon promptly snatches them up, telling her she can’t take those inside. She freaks and slaps Juliette for making her go, but eventually gets over it and goes inside.

Later, Juliette and Deacon sit outside his house and she tries to thank him the only way she knows how — kissing/sex, if you didn’t guess — but he shuts her down, telling her that friends helps each other out.

Juliette’s response? She’s never had a friend “who didn’t want something from me.” Ouch. Deacon then tells her she needs to put the past in her rearview, but it sounds like he’s having trouble doing the same. Will he relapse this season?

Avery (Jonathan Jackson) turned his creep factor up to 11 this week by royally screwing up Gunnar and Scarlett’s opportunity to sell a song to Lady Antebellum. The pair was asked to perform a song for the band’s producers and Avery weaseled his way in to play guitar on the track.

That’s when things went downhill: Avery didn’t like the googly eyes Gunnar was making at Scarlett, so he hijacked the song with his guitar — and it was obvious was he was doing.

Gunnar later confronted Avery, telling him that their googly eyes are just part of an act. Scarlett — ever the spineless girlfriend — then retaliated by telling Gunnar that they are just friends, nothing more. Gunnar’s like, “LOL, I know. I’m having sex with Hailey anyway.” She was obviously jealous, but tried to play it off.

Turns out Avery’s “master” guitar playing killed the deal. Scarlett then freaked out on Avery, telling him she just wants to be with him. Grow. A. Backbone.

Side note: Did you know that Gunnar and Scarlett are actually British and Australian, respectively? We were blown away, given that these two have spot-on Southern accents despite never setting foot in Nashville before filming.

Rayna takes a back seat 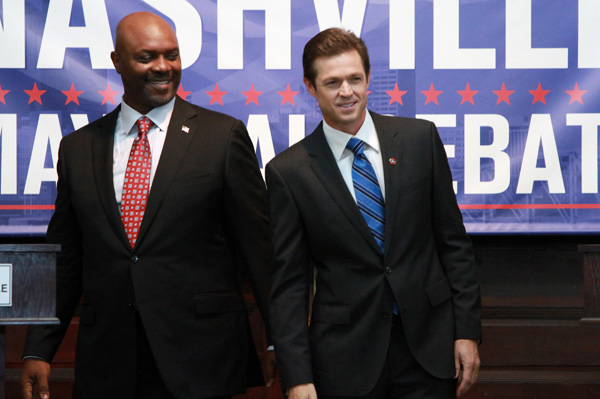 Rayna James (Connie Britton) was, surprisingly, a side character this week. Her role focused mostly on her attempts to get Deacon to sign over the rights to a song for use in a commercial. Deacon doesn’t want to sell out, but Rayna needs the cash.

She’s also thinking about her next album — and it has to be good, she says. The problem? No writers are available to collaborate with her and she can’t work with Deacon (given that sexual tension and all.) She decides to write by herself, prompting Teddy to ask why she’s not working with Deacon. Obviously he knows he’s number two in her heart.

Speaking of Teddy, he’s still in the mayor’s race — and losing badly to his opponent. It turns out that the possible affair between Teddy and Peggy was more of a clandestine financial deal — Teddy needed cash for his failing financial deals and Peggy found said cash. Turns out they paid back the $2 million, but it’s still embezzlement. Peggy wants to come clean, but Daddy Lamar steps in and tells her to be quiet — he’d take care of it all.

And he did. So, problem solved on that front, but another is on the horizon. Teddy insists that the relationship between the two business partners is strictly platonic, but a private investigator catches them being all touchy feely. Scandal alert!